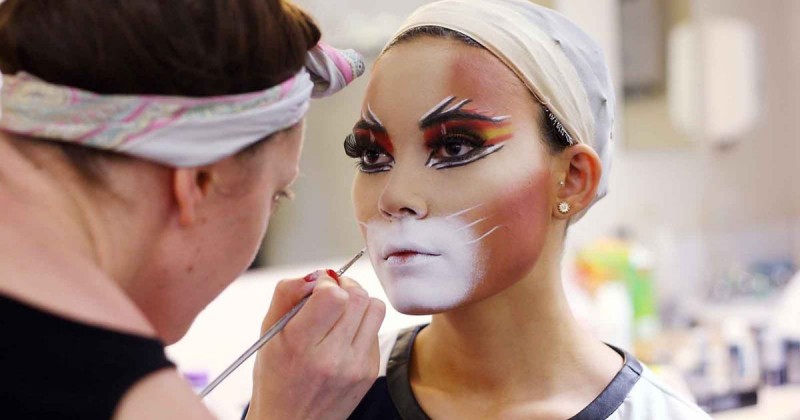 I was performing in “Greater Tuna” – in a dream role.  The theatre was VERY small, less than 100 seats and I was playing about 20 different roles in the show.  Two performers, dozens of costumes and two helpers backstage to help with the lightning fast costume changes.  I have a naturally red face, I don’t know why, but in the lights I look normal – most people look very pale.  Typically, I would wear very little makeup, if any, unless the role required it.  As I was going onstage during one of the first few performances, my fellow actor looked at me and said, “Why aren’t you wearing any makeup?”  I said look at me under the lights out there and tell me if I need any.  (I knew the answer of course).  When we got back to the dressing room after the show, he was dumbfounded, and jealous…..not needed.

Makeup is a fun thing for the audience but sometimes not so fun for the actors.  Here are some interesting stories about makeup in musicals.

CATS – you cannot do a story about makeup without talking about the musical CATS.  The original makeup designer for CATS was Candace Carell.  Her trick was to teach all of the actors how to do their own makeup.  So, the performers went to makeup classes.  At first, professional makeup artists painted each performer with its own specific design. Photographs and color charts were provided to each actor.  Then, the makeup artists drew either the right side of the face or the left side and the actor had to do the other half.  Then the actor had to do it all.  All of it was supervised and approved, of course.  But eventually the actors had to paint their own faces. 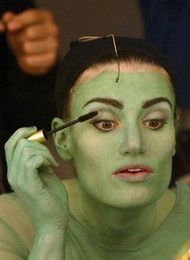 Elphaba in WICKED – I understand this took a while to perfect.  A character who is green – yikes.  Working with the costume designer (who made Elphaba’s costumes long sleeves with long skirts and high necks) the makeup designer started by using a spray technique on the face, then, moved to applying the green foundation manually.  But…the actress wearing that green face actually has many shades of grays (and other colors) on her face as well.  It is not just one color. (By the way, notice her microphone coming down on her forehead.)

PRISCILLA – this is my favorite. I saw the musical in London and sat close enough to see how the actors were able to do the makeup changes quickly.  To do a full makeup change takes a LONG time and the show requires multiple makeup changes throughout the show.  To do this, the actors wore “eye masks”.  A little like the Lone Ranger….they simply put over their faces masks that were flesh colored on the sides but were designed to look like “drag queen” makeup around their eyes.  Their only makeup change was lipstick!  The show was in a huge theatre so the vast majority of the audience could not notice it…..but I did.

What are your favorite makeup stories?  Love to hear them.