Since 57th National Mathlete Sum-it has been given to Theatrical Rights Worldwide, I have been lucky enough to start working on my next project.

Truth is, I have been thinking about this next project for a while, but not a lot.  My mentor, Ken Davenport has been urging me to start moving and get the ball rolling since August, but now things are starting to happen and I wanted to share some news with you. 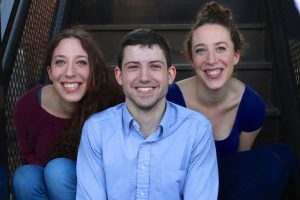 First, I have contracted with a composing team to write the musical based on a story of mine.  And, I am thrilled to announce that Dylan MarcAurele and Jaclyn and Jennifer Enchin are those writers. Dylan wrote three songs for 57th National Mathlete Sum-It and was the conductor for the production at the New York Musical Festival.  And Jaclyn and Jennifer Enchin will write the book and lyrics.

Now, every producer thinks their composing team is special, but this one really is.  First, Dylan is an amazing composer, living in NYC, and is part of the very prestigious BMI Workshop.  Read HERE for the details about that organization.  Next, Jaclyn and Jennifer are sisters!  More over, they are TWINS!  Dylan and I laughed out loud when we read some of their work.  And when they wrote a “sample” piece for me, it had both heart AND jokes.

We were able to meet a little while ago and go over the story and get to know each other.  And let me tell you….magic is happening.  MAGIC……and ….FESTIVE….and…MERRY ….and it was a celebration.

(The above was a hint to the show we are developing…..)   Did you get it?  Well, fear not.  It is a CHRISTMAS show.  A holiday musical that can be produced over and over each year.

Of course, it will have a strong female lead and interesting female supporting characters, and it will make the audience laugh, cry and get goosebumps.  (Well, that is the goal anyway….)

AND….All the best to you and your families.
Larry Little
Producer

« Musical Revivals – what is coming up!!
What makes GREAT Choreography? »