The first reading of our Christmas musical!

“I don’t know enough about Grace.”

“This part does not make sense to me?”

“The piano part at this point is too complex.”

“What is your working title?” 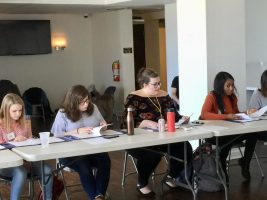 These are some of the things we heard at the reading of the first part of our new musical.  With a draft completed of 20 pages and three songs, I hired actors and musicians.  From 10am – 2pm they read/sang through the material. The composer team , myself and the other producers listened and watched.  It was our job to listen and learn.  What did we learn?  The answer to that is at the end…..but first…. We had to deal with other things.

The actors had to learn three songs in just two hours of rehearsal.   The music is complex, exciting, with a lot of dialogue between the singing.  They also had to read the dialogue and make changes as the writers re-thought some of the lines. 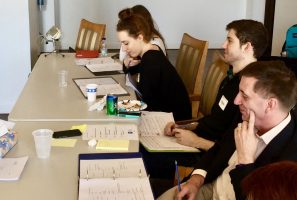 After we quickly ate pizzas and cookies, back to work.  More interviews, more learning of music and then read and sing the whole thing again – this time trying different things.  “Can we add more pizzazz to the ending?”  I asked the composer? “Sure” he said and then quickly told the musical director to change the last part of the accompaniment.   The librettist/lyricists immediately said something like, “that dialogue does not work, it is cut.” And the actors began scribbling on their scripts and scores.

Then, toward the end of the day, we stopped.  And I asked questions of everyone in the room.   What are the questions you have about the material? What makes sense?  Are you confused about anything?  Who is the leading character? After a bit of reticence ….. came some of the questions above.  At the very end, I said to the actors, “Grace goes on a journey.  Allow fantasy into your imagination. Now, I have not given you the title yet. Where do you think Grace is going?”  murmurmur…..

Then, after I told them a collective “Ahhhhhhhhhhhhhh” came over the room.  I think we are creating magic.

« Casting…why is it so difficult for actors and producers?
Writing stories that are not your experience… »