Again?  Isn’t that going to just confuse people?   – That is what I said in our marketing and PR meeting when we discussed a new logo design for our upcoming production of THE LAND OF FORGOTTEN TOYS.  Our marketing consultant assured everyone that this was quite normal and that we needed a new branding featuring our two leading actresses that “spoke” more to what the show was about.  I was not convinced.  So, I called one of my mentors/consultants.  YES, it is VERY common.  Many shows go through multiple graphic designs leading up to a new production and sometimes the design changes during the campaign!  Well, I wanted to avoid that so I agreed to get moving on a new design/logo that could be used as a poster, flyer, digital ad, etc. 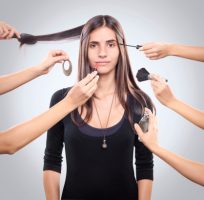 Hands putting make up on a young woman

First, you need a top notch photographer who is familiar with theatrical shoots but who also understands the style of family entertainment and our show.  It must be Christmassy, focused on females, fun and whimsical.  All in one poster.  So, I hired a great photographer.

Then, of course, I needed to book the actresses  – who are very busy in their personal and professional lives – but in the end we found a free date that they had in common with the photographer.  Ahhhh, what about a stylist – YES – we need someone to “touch up” the girls make-up and hair.  AHHHH, they need costumes, right?  YES – costume designer and I chatted about the looks all through email because she was in tech rehearsals for another show.  But, in the end – we did it.

The night of the photoshoot arrived and the equipment was unloaded into a free room in our condo building.  LOTS of equipment.  Lights, cords, cameras, more lights, back drops and on and on.  Then the stylist’s equipment was unloaded – several very large suitcases held dozens of brushes, curling irons, powder and makeup for every actor imaginable.  Food had to be brought in (who can work on an empty stomach?) and then the marketing director had to be present as we worked through the hundreds of pictures taken that night.  Midway through the actresses changed into each other’s costume to see if the colors worked better that way – ahhhhh lighting.

About a week later, we had the samples of the photographers top photos.  Then a background was confirmed and one picture was chosen.  Are we done yet?  Nope!  Then it goes to the graphic designer where we look at typeface, colors, composition and harmony (sounds like SUNDAY IN THE PARK WITH GEORGE, right?)

That is where we are now….stay tuned…..new looks take a lot of people…and they take time. But I will share that was I see so far is AMAZING.

« Casting Children in THE LAND OF FORGOTTEN TOYS
Forgotten toys from our childhood! »