So much to do…and to learn!! 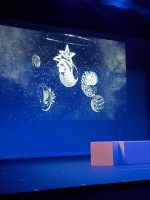 In his recent blogs, Larry Little described the complexities of mounting a staged workshop for THE LAND OF FORGOTTEN TOYS.  And he talked about some of the things he learned from the performances and from the audience feedback.  I learned a whole lot, too.  And I’m still learning.  But less about the show than about the process and activities of producing.

At the beginning I started out slow, cheering and supporting, and maybe helping a little.  But my role has grown.  And the experience has been a process of learning new things – just about on a daily basis.  Let me describe a few things, just from the days before and after the workshop. 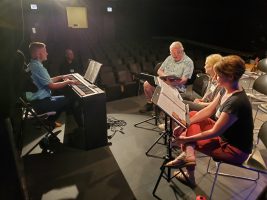 There were the invitations to the workshop.  The performances were free.  But we had to have a registration system to make sure we didn’t over-book.  “Maybe no one will come,” we thought.  But then, just 48 hours before the 4:00 show, we were almost totally booked.  So we pivoted and decided to allow an audience to view the final dress rehearsal at 1:30.  And, of course, that led to greeting, welcoming, and listening to our guests.

There was the decision to add a drum part, along with the piano.  That meant contracting with a drummer – and not only to perform, but also to create and transcribe a drum part (what they call “drum charts”). 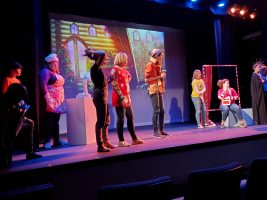 In the weeks leading up to the workshop, Larry made decisions about the “creative team,” which I’ve learned means all those folk whose names are typically on the front page of the program!  And that means that, after informal conversations and emails, a series of contracts had to be prepared.  Each one was different, describing accurately what that role required.  Wow, did I Iearn!  From more experienced folks, both on our team and in the wider theatrical community, and occasionally from a frantic run to Wikipedia!  But in the end, director and choreographer and associates, projection designer and an associate, sound designer, lighting designer, costume designer, musical director, orchestrator, stage manager – all signed, sealed, and delivered!

Finally, almost within minutes of the end of the workshop, Larry and the directors began making firm commitments to the performers we want to use for our upcoming five week  run at the Greenhouse Theater Center.  More contracts.  These were easier, since I could develop a template for them all, simply leaving a spot to name the specific role.  But there were a lot of them – with more yet to come.

So much to learn and I know I’m not done yet!  At least I can still say:  I’m having fun!  I think you will, too, when you see the show!