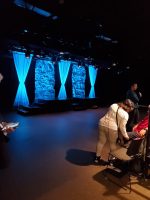 About a month after GIRLHOOD opened its pilot production at Bravo Performing Arts last summer, I received an email from a high school in Hammond Indiana.  They asked if the show could be done with an all high school cast.  As you may recall, GIRLHOOD is the story of girls starting in middle school and following their adventures, traumas and dramas through to high school graduation.  So the pilot production used middle school performers.  The show is a song cycle with very limited dialogue in between songs.  The show is also written so that if a director does not want to perform certain numbers or use order presented in the score, they can be cut or re-arranged.

I was thrilled to hear from the director in Hammond because we had always wanted GIRLHOOD to have flexibility .  We wanted it to appeal to middle schools AND high schools.  I started a conversation with the teacher about how we could make GIRLHOOD an all high school experience.  The first song in the show would be the first day of high school instead of middle school.  The director decided to do it! 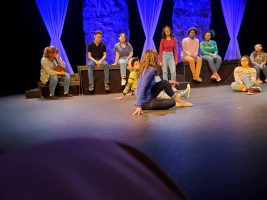 Along the way, as they were in rehearsal, the director and music director asked permission to change some dialogue to make it more “appropriate” for high school students.  For example, the director felt one song in the show was really a “middle school” experience, but the song was so good she wanted to keep it.  She proposed framing it as a “flash back” to middle school.  How clever, I thought, and quickly agreed.

The high school director also asked if she could make the show “edgier” and more urban, since she was going to be using a very ethnically and socio-economically diverse cast.  I then shared with her some alternate lyrics and dialogue that we had already developed but needed to cut for the middle school production.  She loved the material.  Then, she asked one more thing.  She was going to be using two boys in the cast.  (The show is written to include a small number of boys.) One of the boys is openly gay and he asked if he could play a gay character throughout the show.  (The director wanted to showcase all kinds of students in the production.)  Again, I thought it was a great idea.

Well, we saw the show last Sunday and all I can say is WOW!  I sat next to the Principal and took a deep breath. But all was well!  I breathed a big sigh of relief that the show worked really well using all high school students AND changing the show slightly to feature their more mature experiences.  Afterward, I asked the students about the show.  Was anything missing?  Did the music capture their experience?

Over and over they talked about how honored they were to be working on a new musical and how thankful they were to be trusted with the material.    THEY were honored, I thought….. Hmm, truly I was the one honored.  Here’s to Hammond Academy of Performing Arts!!