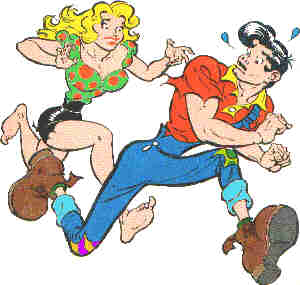 We all know how much fun it is to have a dog in a production.   And luckily, most shows that require a canine character also require children, happy to baby sit the pup  offstage.  Audiences love it, even if Sandy dozes off while ANNIE is singing or Toto pees down Dorothy’s leg during “Somewhere Over the Rainbow.”

Ever work with a pig?  When I became the Producing Artistic Director of St. Bart’s Playhouse in New York, I opened my first season with LI’L ABNER.   One of the characters, Moonbeam McSwine, is a hog farmer, and I decided that she should be accompanied by one of her charges when she enters during the opening number.

I secured a small, adorable piglet, Petunia, from a farm in New Jersey.  The first time I reached into the pen to pick up Petunia, her air horn squeal laid me flat against the wall.  “Reet!  Reet!”  Pigs don’t like to be handled and have no defense mechanisms, other than that frightening voice. 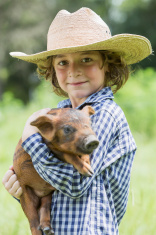 Petunia’s first rehearsal – The opening number begins.  “It’s a typical day in Dog Patch, USA.”  (From offstage: “Reet!  Reet!”)  “Where typical folks do things in a typical way.”  (“Reet!  Reet!”)  Finally, Moonbeam enters, dragging the piglet by the neck across the stage, kicking and squealing the whole way.  Thus it became clear that putting her on a leash was not going to work, and I told Moonbeam that she would have to carry Petunia on.   Then my savvy stage manager suggested that we might have a vet prescribe a mild tranquilizer for Petunia, just to take the edge off, as they say.  And so we did.

The opening number begins.  “It’s a typical day in Dog Patch, USA, where typical folks do things in a typical way.”  (Nothing from offstage!)  I’m greatly relieved!  Moonbeam enters, cradling the by now sizeable sow in her thin, quavering arms.  So catatonic looks the drugged Petunia that she could have been a stuffed animal.  Half way through Moonbeam’s brief solo, Petunia poops and it pools at her feet.  The barefoot dancers come on, and slip on it, sending “greetings” over the first several rows of the audience, who hold their programs over their heads for cover.

This was not an auspicious opening for my first production as the head of the theater company.  Thereafter, we found the right balance for Petunia’s drugs and costumed her in polka-dot Pampers, just in case.  When the production closed, we never saw the warm-hearted actor who played Moonbeam again. She did not deserve to be upstaged by that animal.  I suppose the moral of this story is that sometimes, when an idea you have just isn’t working, you need to let it go.

Reprinted from onstageblog.com with permission from Tom Briggs