I have heard for years that characters in musicals sing when they can no longer speak.  The songs in musicals move the plot forward and tell us about the story, the circumstances and the characters.  And sometimes those songs are funny….sometimes they are very funny.  Here are some of my favorites. 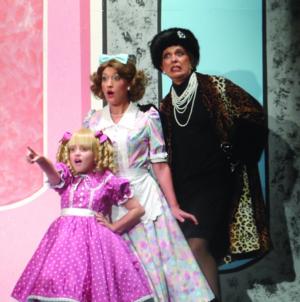 “I Hate Musicals” from the musical RUTHLESS.  Ironic, hysterical and full of parodies.  And it is a great opportunity for a talented actress.  “I hate the genre, it is all second rate!”  “I hate musicals, but not as much as I hate this song!” are some of the great lyrics.

“A Big Black Lady Steals the Show” from FAME BECOMES ME.  The first time I heard this, I screamed out loud. This musical was designed as a showcase for Martin Short, but this became a runaway hit.  “We gotta give people what they expect on Broadway.”  “If your plot is runnin’ thin and your ticket sales are slow – let a big black lady steal the show!”  Listen to the song as it morphs from an uptempo pitter/patter song to a solo ala “And I am Telling You”.

“Everybody wants to be Sondheim” written by Alan Chapman….(Alright I am cheating, it is not from a musical).  He wrote the song when he was doing research about what composers were writing in New York.  He says he went into a record store and purchased some recordings of new songs – and they all sounded like Sondheim….hence …….the title. 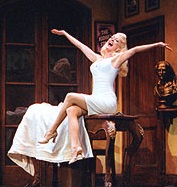 “When you’ve got it, flaunt it” from THE PRODUCERS.   Mel Brooks wrote the music and lyrics and it is funny, funny, funny.  When I saw the show in Chicago, the man next to me said, “I think I am going to talk with a Swedish accent the rest of the night!”

What are some of your favorite funny songs from Musicals?  Three of the songs above are written for women to sing….what about comic songs for men?  Any thoughts?