Blog 66 – The Brave and the Strong

An image of a man falling down a flight of stairs.

“If you draw a chalk line on the stage, some actor is bound to trip over it.  That’s how clumsy they are!” – I have heard this over and over in the theatre.  It is, of course, unfair because most actors I know are extremely nimble, resilient and fearsome. I remember the summer I was doing KISS ME KATE and one of the dancers twisted her ankle when the heel of her shoe broke in the opening number.  This incredibly talented actress was a triple threat and she was not only dancing in the show she played a large supporting role in it as well. One of the stage managers saw this happen and by the time she finished the number (YES, she finished the number) someone was backstage giving her an icepack and some anti-inflammatory drugs.

Nonetheless, accidents happen. They happen in high school shows, in community theatre shows and on Broadway.  When accidents happen on stage it brings together the whole company to get through the show and perhaps the run.  Here are some examples of the challenges caused by accidents:

During their preview tour, Christina Applegate was injured while hanging off of a street light pole that was part of the set in a revival of SWEET CHARITY. The show was set to go to Broadway and now the star was out…….I understand the producers were set to close the show and cancel the Broadway production.  But Ms. Applegate stepped forward and demanded  that the show move forward and that she would return to the show when she recovered.  Her understudy would open the show. She perhaps single handed saved dozens, perhaps hundreds of jobs on Broadway. 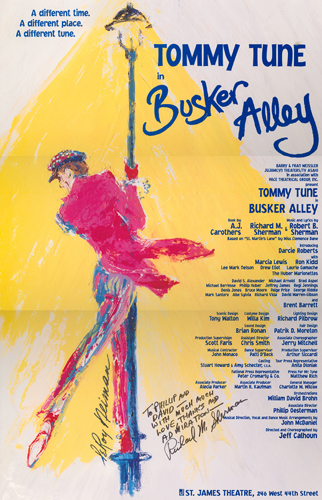 BUSKER ALLEY was on its way to Broadway. (I remember seeing the HUGE mural on the St. James Theatre in New York).  It was on a pre-Broadway tour when its star, Tommy Tune broke his foot on……wait for it…….a twirl around a street light pole!  Tommy Tune was a HUGE star, having won nine Tony Awards, Surely the show would go on.  But alas, for reasons only a few know, the show closed before it went to Broadway.

Of course, there is SPIDERMAN…….injury after injury.  Those brave actors and actresses were dealing with daily rewrites, staging adjustments and technology that had never been used in the theatre before. But when I saw the show, I was blown away by the braveness of the actors.

What are some of your favorite stories of perseverance? When were you in a show that miraculously went on?  Love to hear your thoughts.

« Tech Rehearsals…UGH or Ahhhhh…..
How does audience feedback help you create your new musical? »