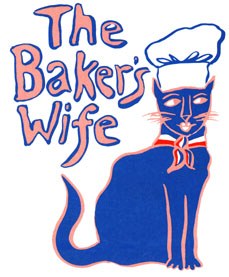 Patti LuPone tells this story in her one-woman show.  It starts: “If Hitler were alive today, his punishments should be to send him on the road working on a musical in ‘trouble’.”  She was talking about the musical THE BAKER’S WIFE. This musical was a huge flop it toured the US in 1976 before it was going to Broadway. But it never made it there!  Ms. LuPone was cast as the leading lady and she writes in her autobiography that there were almost daily changes to the show.  The main song in the show, “Meadowlark” (which by the way is the best part of the show and an amazing song – here she is singing it), was cut and put back in many times.  But, it clearly was a musical in trouble. 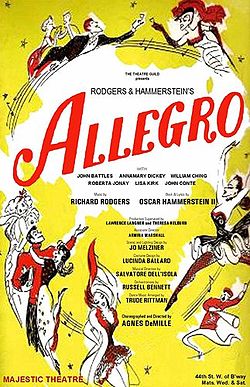 ALLEGRO was another musical in trouble.  Rogers and Hammerstein wrote it.  Yep, you got it, even they had a flop.  It was their third collaboration right after OKLAHOMA and CAROUSEL. But Rogers claims it was his favorite score.  Agnes DeMille directed and choreographed the show and well…..it did not go well. Many said it was beyond its time, but decades later, I don’t believe there has been a successful production of it.  I saw it performed at my high school right after I graduated.  It was lovely….and troubled.

CARRIE…..well……it is considered one of the most talked about Broadway flops ever.  It is based on Stephen King’s novel (with the movie starring a young Sissy Spacek).  The show opened on Broadway in 1988 at the Virginia Theatre.  I was there.  I saw it.  I remember the inside of the theatre was painted black.  I remember seeing Debbie Allen, the choreographer, with a clipboard.  I remember hearing the haunting score by Michael Gore (He of the movie FAME score).  And I remember the scathing reviews after it opened.  The show was later reworked and salvaged in 2012 and I saw a production here in Chicago that was great.  Somehow this show came back from the dead…..

Can the others also?  What are your favorite “troubled” shows?  Any stories to share?