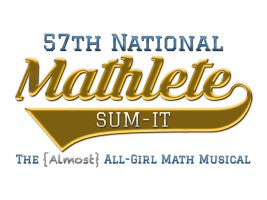 Theatrical Rights Worldwide (TRW), the company that is licensing 57th National Mathlete Sum-It (formerly NUMBERS NERDS) showed me this logo and I liked it a lot.  It has a very “collegiate” feel – one of the themes in the show.

It is no secret that the show is compared to 25th Annual Putnam County Spelling Bee, so the new name fits right in.  Now, here are some things that you may not have known.

When we were discussing a new name, I suggested that the show start with a number – 57th – not the article “The”.  Why?  Because in most theatre listings (most notably The New York Times) they list shows in alphabetical order INCLUDING articles like “the” and “a”.   So, if we omitted the “The” then our show would go to the top of the list.  (I stole this idea from Michael Bennett who used this logic to change the “The” to “A”  in A CHORUS LINE.)

In addition, when I was at a meeting with the publisher, we discussed using a font that was seen on most college T shirts and sweatshirts to give it a more “college” and familiar feel.  I think this works out great.

Oh yeah, one last thing…. NUMBERS NERDS is not gone…that will be on the merchandise that goes along with the show. “I am a NUMBERS NERD!” will be on T-shirts, mugs, etc.

Hope you like it.  TRW plans to give out thousands of perusal copies of the script starting in early 2018!!

Thanks to all of our supporters all along the way….and remember….SMART GIRLS ROCK!!!