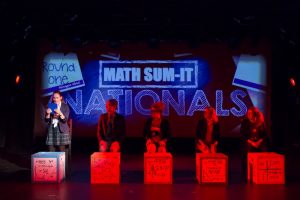 I am pleased as punch….no, thrilled really….to announce that the musical that we have been working on for several years has been contracted to be licensed by Theatrical Rights Worldwide (TRW)!    Yes, this company was one of the licensing companies I profiled a few weeks ago.

Truth is, I have had TRW on a list on large white poster paper in my office for several years.  The title of that list was “Companies I want to license NUMBERS NERDS with.”   It has always been our goal to bring our show directly to the secondary market.  But to do that, the show has to be marketed by a major publishing company, included in their catalog and offered for licensing by schools and companies who want to produce it.  And….we did it.  We are so thrilled that TRW wants to take our show and run with it.  Blessed and grateful.

AND….we have changed the name to 57th NATIONAL MATHLETE SUM-IT: the almost all-girl math musical! Curious about why?  Have other questions?  Click HERE for a Q&A. 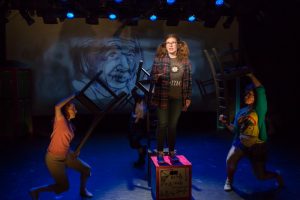 So, I am done working on the show, right?  NOT AT ALL!  For the last few months, since our production at the New York Musical Festival, I have been hard at work getting the musical ready for publication.  Dozens and dozens of hours each month has been put in, cleaning up the score, creating vocal books and finalizing the arrangements. (Shout out to Mike Idalski who worked feverishly on this project.)  Then there was the negotiations with the unions to be able to use some of the audio from our NYMF production, as “incentives” to get school theatre directors interested in our great music.  And, we spent more than a few hours creating a cleanup up prop and costume list.  We also had to deal with the projections that were used at NYMF.  They are really wonderful, and producers will be very interested in using them.  That means they had to be revised and finalized.  And then a prompt book had to be created to indicate where the cues for each slide belong.  And….on and on….

Oh…and one last thing.  Before we completed the contract with TRW THREE schools had already signed on to do NUMBERS NERDS….I mean 57th NATIONAL MATHLETE SUM-IT this fall!  So, the materials had to be sent to them, questions answered and follow ups.  Fun stuff, ha?

Now, the question I am getting asked over and over:  What is up next?  Well, I have already started my new project.  You see, NYMF really opened up new doors for me, and a whole new set of opportunities came my way.  And, I am starting to write the story for the next show.  Want some details?  Soon.  Soon.  Soon.

What do you think should be my next subject for a musical?

Love to hear your thoughts.

« Q&A about licensing
References and Reputation in the Theatre »