What is coming to Broadway this season! 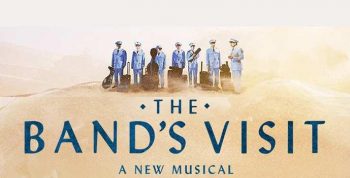 I am so excited!  There are some great new musicals coming to Broadway.  Here are some of my favorites:

THE BAND’S VISIT – After winning the Off Broadway Obie Award last year for Best Musical, this David Yazbek musical will open soon at the Ethel Barrymore Theatre.  It tells the story of the Egyptian Band going to play a concert in Israel.  But a mix-up happens at the border and they are stranded with no bus or hotel, so they must seek the help of the locals.  The buzz is that this is wonderful, poignant show.

SPONGEBOB SQUAREPANTS, THE BROADWAY MUSICAL – Not having children, I know almost nothing about this Nickelodeon cartoon favorite.  But, I do know it started its journey in Chicago and got a lot of positive feedback.  Now, it will be the next family friendly show to play the Great White Way.  With music by some big rock stars – Cindi Lauper, David Bowie and John Legend – just to name a few – it is sure to have the audiences dancing in the aisles.

FROZEN – Yes, the Disney movie is coming to Broadway.   After a run in Denver this past August, FROZEN is on its way to Broadway.  The music is written by Kristen Anderson-Lopez and Robert Lopez, (the duo who won Oscars in 2014 for “Let it Go”) and Bob Crowley (one of my favorite Broadway designers) will create the sets and costumes.  The movie grossed over $1 billion dollars (yes that is billion) and Disney has been hard at work trying to get the stage version to work.  Here is one of my favorite videos of the famous song and costume change.

GETTIN’ THE BAND BACK TOGETHER – (shout out to my mentor Ken Davenport!) is a new musical about an investment banker who loses his job and decides to “reboot” his life by gathering his old high school rock band.  The music is fun and exciting.  And who doesn’t want to “relive” their life as a rock band member?

Lots more as well.  Revivals are next up.

What show do you want to come to Broadway?

« References and Reputation in the Theatre
Once Chance….. »