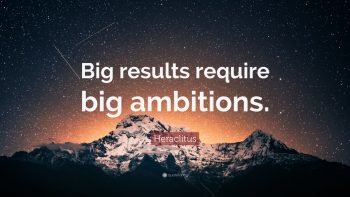 I just read a quote from Jay Leno and it went something like this:

“Ambition wins over genius 99 percent of the time. Sooner or later, the other guy is going to have to eat, drink, go to the bathroom, or take a vacation, and that’s when I catch him.”

Ambition is something that I think I was born with.  As I look back, I am not sure when I had it or learned it.  Maybe because I was a restless kid, the middle child. But I can recall going door to door selling greeting cards, magazine subscriptions and even seeds.  Since I came from a family of simple means, if I wanted spending money I had to earn it myself.

I got through high school, probably because it was an “arts” high school, and academics came after dance class, voice lessons and rehearsals.   In my senior year, I had an English teacher who was brutally honest with me and told me that I was a terrible writer.  How did I get this far without ever learning how to write a paper?  (I knew the answer…I just faked it….) but she was concerned so she took me under her wing and worked with me personally on the mechanics of writing.  I am very grateful to this woman for having the compassion for taking the time for me.  It helped me immensely in college.

Speaking of college, I was blown away when I first got there.  I thought I was a reasonably intelligent person, but soon learned I was really at the bottom of the class.  With poor writing skills, little experience with intelligent discussion and having never read a novel (yep…it is true…) college started out as a wake up call.

Within the first few weeks of college, we were assigned the task of reading “King Lear.”  Now, I had performed Shakespeare before two times – “Midsummer Night’s Dream” and “Twelfth Night.”  But I had great directors and mentors who tutored all of us through the texts.  But “King Lear” was another story.  I was paralyzed.  I did not know where to start, so I asked for help.  Someone turned me onto a version that had significant annotations of this tragedy.  So, with both books in my hand, I went into a silent study hall and read “King Lear.”  It took me over 12 hours.  Not kidding.  I stopped for lunch, but went right back to reading.  When I finished, I was overwhelmed and exhausted.  But I understood the basics of the drama.

That is when I learned that I had to work harder than most people to get ahead, to level the playing field.  Just like Jay Leno.

« Many paths…..
A Word from the Associate Producer… »

This was very interesting to read Larry! A little history about my brother. Some times being siblings, you don’t really know some things about your sibling. Love you…Carol