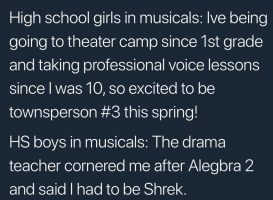 I saw this on Facebook the other day and just saved it to my desktop, thinking there is a blog here somewhere.  A few days went by and I saw two musicals – a new 75 minute version of PETER PAN with a dynamic, new score and one of the first pilot productions of FROZEN, JR. (Disney in their brilliance, is releasing FROZEN to middle schools and high schools while the show is still on Broadway.  I understand it is their hope that since so many children have seen the movie, they will all want to do the school-based live version.  Then, after they perform in it, they will want to see the National Tour.)

First, what struck me about FROZEN, JR is that this cut version is in some ways better than the Broadway version I saw in New York!  The show runs about 1.5 hours and really focuses on the story – I felt lost at times watching it on Broadway.  And, in addition, the two female leading roles, are very well defined.  And, they each have great music to sing.  Although FROZEN has a lot of great featured roles – for both boys and girls, it is the girls who dominate the story….finally.

As you know, creating musicals for young women is what we are focused on at CPA Theatricals, so I eagerly went to meet the young actress playing Elsa after the show.  The theatre allowed pictures after the show with the cast.  Turns out, I knew the 13 year old – her name was Tori.  She played Mary Kate in 57th NATIONAL MATHLETE SUM-IT (formerly Numbers Nerds) last summer.

She told me about the great training program she is in this summer.  Days filled with acting classes, voice and diction classes, singing lessons and dance, dance, dance.   You could tell this young woman had training.  Her vocal technique was polished, her dance moves were sophisticated and she radiated personality and exuded stage presence.

As I looked around the auditorium, I saw many girls in the audience, some as young as 3, 4 or 5 – some wearing costumes, tutus and capes.  I was reminded of our finale to GIRLHOOD – “Fine and Fierce.” Yep.