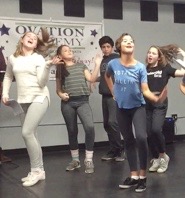 The texts and emails started the day before.  A bit of a panic it seemed.  “I don’t think we can realistically do 6 numbers in 4 hours!” “I cannot teach choreography before they learn the song.” “Four more students will be showing up and they don’t have the material.” “I won’t be able to come to the meeting before the workshop, I am teaching a class.”

This is what happened the day before GIRLHOOD’s first workshop.  I had made endless copies of the music, put together librettos for the leadership team, had gone over the intense schedule with my associate and was getting ready to buy treats for the students.  Now, I had to go back to my computer, send out more materials, double check the grand totals and revise my shopping list.  No problem – that is what producers do!

You see, 25 middle and high school students were scheduled to show up the next day at Ovation Academy to work on 6 numbers of GIRLHOOD.  Our goal was to see if the music was in the right key, if they could sing the lyrics, and do some basic staging to see if we were on the right track.  As a song cycle, some of the songs relate to characters that we are following for the whole show and some of the songs are “stand alone” – which means they revolve around a character we only see one time. 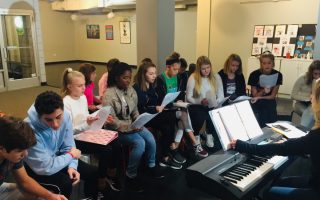 The next morning 20 girls and 5 boys filed into the large dance studio to hear my prep speech.  But, before that, the leadership had an intense meeting to go over details.  We decided to not work on one number, and to work on the duet only if we had time.  So we were down to four songs – all the group songs would get music and staging rehearsals.  Everyone was on the same page – and we were ready to roll.  A representative from our PR firm showed up and started interviewing and filming immediately.

What happened then…..was nothing short of magic.  My job was to trouble-shoot.  Was there confusion about what group someone belonged in?  Did someone need more music?  What kid had to leave early?  And, of course…..I handed out the snacks.  “Can we have more than one?” “Can I take the rest of these home with me?”  Ahhhhhhh kids.

Click HERE for a brief recap of the day.

Next week, we do the exact same thing with four more songs from GIRLHOOD.  All as tiny steps forward, on our way to a full production next July!