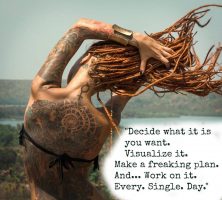 I saw this on a friend’s Facebook timeline.  And, I paused after reading it for a couple of reasons.  First, I believe in this.  I use this as often as I can.  And, many times, it works.  But, of course, it does not work all of the time.  I don’t know why, but that is the truth.

Similarly, I once had a yoga teacher tell the class as we were relaxing on our backs on the floor, “Now, think about the headstand.   Even if it is not something you can do in your practice today – picture yourself in a perfect headstand.  Feel that your body is relaxed in a straight, inverted position. Visualization is most of the work.”   That helped me a great deal when I was learning the headstand.  And now it helps me stay steady in the pose for almost two minutes.

As I am developing my musicals and working on other projects as well, sometimes I get stuck.  Faced with a dilemma.  Usually, the next thing I do is consult.  I talk with a handful of advisors and ask their advice.  Gather information, facts and opinions.  Then, –  when I am most successful – I think about it.  Let the ideas percolate.  I imagine how each potential solution would look, how it would feel.  Then,  I decide.   And….many times this works.  Sometimes it does not.

Visualization is one thing, but the part that is really important is toward the end.  You must work on it every day.  Every day.

I remember a story from Jim Carrey.  Before he worked on “In Living Color” and before he became a huge star, he wrote himself a check for $1,000,000.  In the memo line he wrote something like “For acting services”.  He put the check in an envelope and put it in his desk.  Then, he said, every day he worked hard toward earning that kind of money.  He went to class, he perfected his comedy routine, he called agents, went to auditions, etc.   All the time, thinking to himself – If I want to cash this check, I must work for it.  It is not going to come to me “magically.”

Visualization is good.  No, it is great!  But it is the work that counts most.

« The BEST ideas win…regardless of where it comes from!
NYMF this year… »