Updates and an Announcement!

A few of our supporters have asked for an update on 57th NATIONAL MATHLETE SUM-IT and on the other shows we are developing, so here goes……(oh, and there is an announcement at the end of the blog!)

57th NATIONAL MATHLETE SUM-IT – This great musical featuring strong roles for young women (formerly called NUMBERS NERDS) has had five productions so far.  Folks from Waukesha, WI, Atlanta, GA, Wichita KS and LaQuinta, CA have produced the show and audience response was great!  In January, Theatrical Rights Worldwide started to license the show to high schools, colleges and amateur productions.  Their plan is to give perusal copies to theatre teachers at the various “thespian” festivals around the country in the coming months.  So, it may be a while for it to “catch on” but when it does….we are ready! 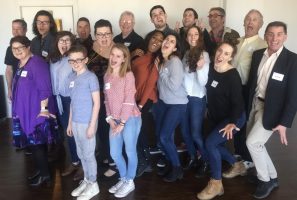 CHRISTMAS MUSICAL – Yes, we are developing a new musical for the Christmas season.  We had our first reading of the first part of the show this past weekend and WOWZA!  The music is fantastic!  The lyrics and the book are funny and very well done.  The actors gave us great feedback and the writers went immediately back to work on re-writes!  The story is about Grace, a 22 year old, who is smart and creative but is just stuck in her life.  The show will be Grace’s “hero’s journey” as she has experiences in a “fantasy” world that empower her to move forward in her life.

GIRLHOOD – We envision this as a show following a group of girls from the beginning of middle-school until graduation from high school.  To make sure we develop a “real story,” we are in the process of interviewing girls and young women. And let me tell you – the things I have learned are AMAZING.   I am creating fictitious characters that will embody the essence of what I am learning from these interviews.  We are also interviewing and reviewing composer submissions for the music and lyrics.  This musical will be a song cycle – showcasing many different composer teams!

ANNOUNCEMENT – CPA Theatricals is proud to announce that we have come on board as Executive Producers for Refuge Theatre Project’s production of THE SPITFIRE GRILL.  “This charming heart-warming musical is what we all need right now,” says Artistic Director Christopher Pazdernik.  Keeping to their tradition of performing in unconventional spaces, this show will be presented at Windy City Diner!  So, excited – more details to follow.

Thanks for your support.

« Exciting News!!!
Casting…why is it so difficult for actors and producers? »

Larry – since 2/3 of my life is spent with high school girls, touch base any time for GIRLHOOD – u know I’d love to help!
Carol