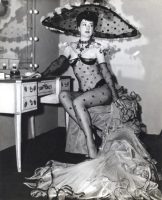 I am reading the wonderful book Showstoppers!: The Surprising Backstage Stories of Broadway’s Most Memorable Songs by Gerald Nachman.  It seems every few pages I am finding myself saying, “Hmmm, I never knew that!”  So, I thought I would share with you some of his information.

First – GYPSY.  This musical is a gangbuster musical that has a dark side.  It is about “Mama Rose” and her “dream” to have her children make it big in show biz.  It requires a powerhouse of an actress/singer to lead the charge and it was written for Ethel Merman. I have seen GYPSY with Tyne Daly, Bernadette Peters, Patti LuPone, Alexandra Billings and a few others.  All very different interpretations, all extremely well done.  Many songs in the score are now considered standards. The music is exciting (what an overture!) and the lyrics (written by Sondheim) are some of his best.  Here are some fun things I learned from the book:

That is for now……More later…..