A word from the composer!

Dylan MarcAurele here! I composed the score for THE LAND OF FORGOTTEN TOYS, and in honor of my flying in to see the show tonight, Larry asked if I’d write a guest blog post about composing. 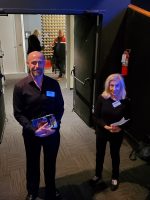 My composing process is not glamorous. Ideas for music tend to strike me randomly throughout the day, so I record voice memos. As of this moment, my 3-year old phone has 930 voice memos. Most of them are embarrassing — yelling melodies outside a screeching subway train, mumbling chord progressions in the middle of the night — and they generally have names like… “Bad idea”… “Good idea maybe?”… and of course, “Final Final Final Final”.

The next step for me is to ‘properly’ record a song at a piano so I can share it with the other writers. But rest assured, it still isn’t glamorous, because I happen to have the vocal range of a wounded cow. Furthermore, at least once per voice memo I will either (a) yell a curse because I played a wrong note, or (b) break down laughing. Sometimes both. 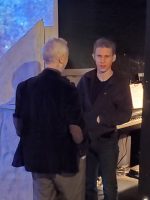 Despite all that, in writing THE LAND OF FORGOTTEN TOYS, my collaborators – Jaclyn and Jennifer Enchin, Mike Ross, and Larry Little – have been able to see past the surface of these voice memos. They trust that I hear the ‘good version’ in my head. But you can imagine the excitement we’ve all had to finally hear the songs performed by an actual cast of incredible singers here in Chicago, fully staged and tech’d. And instead of just piano, we now have killer orchestrations by my fellow New Yorker Chris Gurr (brought to life by our fearless music director Stephen Coakley!).
The show tonight is a preview, so I’m sure I’ll have some music-related notes. But at the end of the day, I’m just thrilled to have a production and collaborators like this — making an amazing show out of what were once just a bunch of silly voice memos.
Dylan MarcAurele
Composer

The score is beyond all of our imaginations. To use the word ‘perfect’ isn’t perfect enough! It is an absolute JOY to sing this songs and to be a part of this cast. THANK YOU Dylan for your incredible gifts!