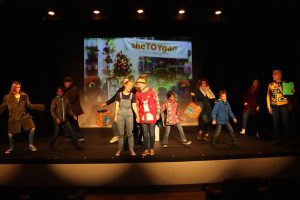 The drummer wrote his own arrangement for the music, but the composer had to answer some questions, and approve of the orchestration.  So, the two piece band rehearsed the night before till late, then again in the morning.  All to prepare for an invited dress rehearsal and the workshop performance of LAND OF FORGOTTEN TOYS.

As we ushered the last of the people out of the theatre after the dress rehearsal, out came a tall ladder with the lighting designer saying “Out of my way.” Set pieces were pulled onto the stage and prepared for the next show.  Actors in various forms of dress made their way onto the stage to work out last minute staging adjustments.  The director was answering dozens of questions at once, it seemed.  Food had to be prepared for the after-party.  The bartender started to set up the beverage and snack bar.  Out came the costume designer who wanted to try a different combination of costume pieces for one of the actors.  The ushers came into the house and tidied up the aisles. The children made themselves peanut butter and jelly sandwiches. And it was my job to help in any way I could.  “Hold this ladder and DON’T let me fall.”  I was told, as I climbed over the aisle in my suit pants and jacket. 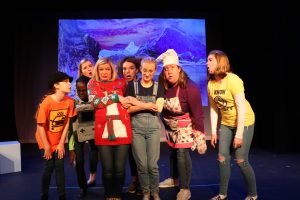 “Who will speak first in the preshow announcement?” “Stand on the stage and let me set the light level for your talk back after the show.” “Speak into the microphone so I can get a sound level.”  All this and a lot more.

But in the end, it happened.  Our workshop production of THE LAND OF FORGOTTEN TOYS was a success.  The show was enthusiastically received, with comments like “I was so touched!” “So happy to see such strong women characters on the stage.” “Very entertaining.”

Of course, we had some helpful feedback also.  “I wanted to see more of the toys.” “The costumes were not fully realized and I was waiting for it.” “At first I was unclear who the lead was.” “I didn’t like the Packers Christmas sweater.”  “The music was so charming, but felt bare at points.”

So……back to re-writes.  The composer came away with a bunch of notes, the directors and I are meeting tonight to go over our list of how to make the show even better. But we all left feeling like we have something special here.  Something for the family.  Something to make folks feel like there is hope in the world. Stay tuned.

« Workshop Rehearsals!
So much to do…and to learn!! »