This past weekend was a holiday weekend for Christians (Easter) and Jewish People (Passover.) As I watched the pictures of my friends prepare their Seder dinners and I, myself, cooked a turkey for Easter, I remembered a wonderful event that the Broadway community participates in each year – The Easter Bonnet Competition.

The competition is a fundraiser for Equity Fights AIDS. It is no secret that as AIDS swept through the nation in the late 1980’s Broadway was devastated by the deaths of so many people.  To help raise money for the care of those with AIDS and for research to find a cure, the Easter Bonnet Competition was first presented by the cast of LA CAGE AUX FOLLES in 1987.

I remember the original production of LA CAGE, at the Palace Theatre, right in the middle of Times Square.  Tickets were sold out for months, so I was crazy sad when I learned that I could not get a ticket.  Then, as I was looking at the marquis of LA CAGE a man put up a sign outside that said something like “Tickets Available for Today’s Performance.”  I ran, right through traffic to get to the box office.  I was not the first one, but I did get a ticket.

The Easter Bonnet Competition is now a big hit each year.  Many performers from Broadway shows perform spoofs of their show and others, with themes related to these holidays.  But what each skit has in common is that they each have a HUGE, outrageous hat involved. Here is one of my favorite. 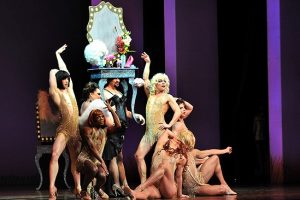 The highlights of the 2018 Easter Bonnet Competition was a skit done by the cast of AVENUE Q – puppets portrayed Pharaoh following the Israeli slaves as they left Egypt.  That competition raised 5.7 million dollars.  The first competition raised $21,000 in 1987 – wow….we’ve come a long way, baby!

Enjoy some of the pictures and I hope you and your families had a great Holiday weekend.
Larry Little
Producer