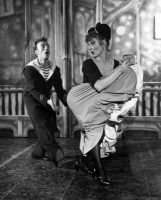 I am sure many of you are watching the mini-series by Ryan Murphy – FOSSE/VERDON on FX.  I was so looking forward to seeing each episode as they unfolded, but since we were traveling I had the pleasure of watching four episodes back to back.  WOW…..that is my reaction.

First, the format of the series is so interesting and different.  Dates and accomplishments bookend each episode.   The show starts off reminding us that Gwen Verdon was a huge Broadway star before Bobby Fosse had a hit. But my favorite “backstage” story – that I did not know before the series goes something like this.

Gwen Verdon had a featured role in the new musical CAN CAN.  She was a dancer with pizzazz and charisma. She took chances and had a fun, sexy, exuberant side to her that was rare. I learned later that the star of the show (A French prima donna known as Lilo) was not happy that Verdon was “stealing” the show, and demanded while they were developing the musical that Verdon’s role be diminished.  But, the producers were no fools, they knew a new star was in the making and let Verdon have her time in the spotlight.) 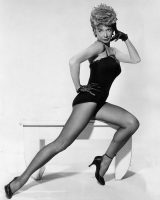 Anyway, the show opened on Broadway and Verdon got the most applause at curtain call.  Then, one night, after the curtain call, after Verdon had left the stage gone to her dressing room and taken off her costume (she was just in her undergarment foundation and tights), the audience would not stop clapping.  Soon, they were shouting her name, begging her to return to the stage for an additional bow.  It did not take long for the stage manager to figure out what was happening.

As the audience was literally screaming her name, the stage manager burst into Verdon’s dressing room and frantically told her to come back to the stage for another bow.  She was dumfounded, and of course not dressed, and didn’t know what to do.  So, the stage manager gave her a towel and practically dragged her back to the stage.  Verdon heard the screams, wrapped the towel around her middle and walked onto the stage.  She stood there for a few seconds taking in what just happened.  Then, she bowed again.  The audience screamed some more.  She bowed one last time and walked off stage.

A Broadway legend was born.

« LOTS to do……
We all need some inspiration now…hope this helps! »