As you know, GIRLHOOD is a story of four 10 year old girls (Melissa, Amber, Morgan and Judy), as we see them struggle, grow and mature into young women.  The show is filled with young girls!  But today, I want to talk about girls a bit older.  Well, a lot older.  This blog was inspired by my colleague Mark Robinson.  I read his blog and then the connection hit me.

The year was 1971 – 48 years ago.  Broadway business was struggling, 42nd Street was a mess, and John Lindsay was mayor of New York City.  But something huge was about to hit Broadway. This is the year when older women were featured in a new musical – FOLLIES. 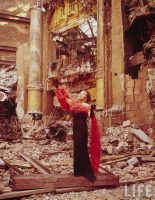 The show is set in an old Ziegfeld- like theatre that is about to be demolished.  The show was supposedly inspired by a photograph:  Gloria Swanson standing in the ruins of a semi-demolished theatre.  The economy was tanking and the huge glorious theatres were a gathering place for vermin.  The “Great White Way” was sinking into despair.

Along came Sondheim, Hal Prince and Michael Bennett. Together they created what is one of my favorite Sondheim scores.  The songs of FOLLIES, sung by women who are revisiting the theatre where they performed decades earlier, tell of unrequited love, lost opportunities, mistakes, regrets and ….aching bones.  The show did not do well – it had a HUGE budget for the time, a large cast (a young cast and an older cast) and it had stars.  And, of course, there were the costumes.  All of this demanded an enormous amount of money.

But shortly after FOLLIES opened, another musical opened. 70 GIRLS 70 also featured mature actors.  With a score by Kander and Ebb, this musical had a much more fun plot.  Senior citizens hatch a scheme to purchase the building they live in, to save it from developers who want to sell it.  Fun stuff, ha?   Unfortunately it lasted only 35 performances, then it closed.    (It did suffer a devastating blow  – In the pre-Broadway tryout – one of the mature actors suffered a heart attack on stage, was carried off stage and died shortly afterward.  Despite that, the cast carried on bravely.)

Thinking about these two shows – both really wonderful, even if they were not the most successful in their first runs – reminds me again of what I see every time I encounter GIRLHOOD.   Girls – any age – are resilient and tough!

« GIRLHOOD in development!
Workshop coming up! »