Greater Tuna then Cabaret, then…. 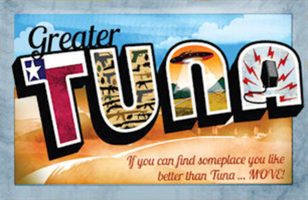 “Greater Tuna” was a dream show for me when I was an actor – and it was a play NOT a musical.  The show has two actors who play more than 20 characters.   The play is a dark comedy, a commentary on small-town, Southern life and attitudes and a withering satire of the same.  It takes place in Tuna, Texas.  And I was cast in this magnificent show opposite an incredibly talented actor.

I had worked with the same producer many times over the previous ten years, and when he called to offer me the job, I jumped.  Then he told me that he was crazy busy, and asked if I would help him produce the show.  Find rehearsal space, hire the director, coordinate with the theatre, etc.  Although I had not produced any shows, really, I said yes.  It all came together quickly and we opened the show.  It ran for several months and as the run was ending, I decided I wanted to pursue producing some more.  So, I went to the Artistic Director/Producer and asked if I could help produce his next show – CABARET.

I told him that I would work for free on that show, and if I was helpful, I would work for half price for the next two shows.  Then after that, I would like to become his Associate Producer.  That worked well for him because he traveled all over the country, and he was grateful to have someone “mind the store” while he was away.

For CABARET, I was in charge of the budget, contracts and the casting.  Ahhh, I thought….I can handle this.  But then, BAM…one problem after the next.  We had trouble casting the show. One issue was that the show required two older character actors. We had a magnificent matriarch of the theatre who was a great Frau Schneider, but we had a difficult time finding her counterpart – Herr Schultz.  Then we lost our leading man just a few days before we were to begin rehearsals.  And on and on.  But, I survived and the show was great.

But I learned some valuable lessons during that show.  1) It takes time to get where you want to get to, so celebrate the smaller victories along the way.  2) Plan for the future, but focus all of your attention on the NEXT project.  For example, if the next big project is preparing for a media blitz, then make sure that is done well before the deadline so that you can plan for the other big projects along the way.  Some projects take a long time to finish – the ideas must percolate, you must do research and always lots of conversation.

I learned those lessons and still use them today.  As I am working on GIRLHOOD and GRACE & THE ISLAND OF MISFITS simultaneously, I try (sometimes not so successfully) to focus on the NEXT big thing.  And this week it is GIRLHOOD – we have a private table read using professional adult actresses in just a few days.  GIRLHOOD takes priority…that means GRACE rewrites go on hold.

Ahhh, prioritizing and deadline setting is something that is so important.  And it is something I still struggle with.