Hundreds of Lanterns in the sky! 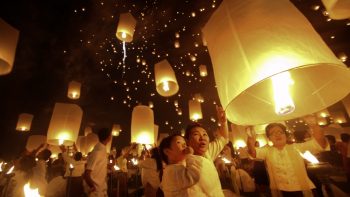 We were standing on the beach overlooking the Gulf of Thailand.  It was just before midnight of New Year’s Eve and there was crowd including both Thai families and foreigners.  We had just purchased sky lanterns.  Thai’s have a tradition of sending these lanterns into the sky over the sea to bring good luck in the New Year.  A sky lantern, also known as Kongming lantern or Chinese lantern, is a small hot-air balloon made of paper, with an opening at the bottom where a small fire is suspended. But there was a problem.  We could not get our lantern’s fire to start at the bottom. 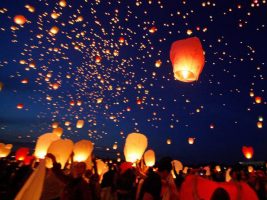 Suddenly, a woman ran up to us and said that it was almost midnight and it was essential to get the lantern into the sky immediately.  She dragged the lantern to the beach and took the lighter from our hands and lit the fire.  The woman knew exactly what to do and we let her guide us.  While the lantern was filling with hot air, and we were holding the lantern on top, she went on to explain that her children and her visited the beach on New Year’s Eve every year.  She also explained that her ex-husband was from Connecticut.  Between her broken English and our elementary Thai we had a beautiful conversation about the New Year.  Out with the old, fresh starts and new goals.  And, before the lantern went into the air, you had to make a wish.  If the lantern took off, your wish would come true.  If not….well, better luck next year.

Finally…after a long wait…and just before midnight the lantern started to rise.  It started slowly, dipped a bit back to earth, then went straight up.  Then….as we watched our lantern float into the sky a breeze caught it and it shot like an arrow out over the Gulf.  The woman screamed and hugged us.  We thanked her and wished her a happy New Year.  She brought us to her children and introduced us to them and they bowed their heads in respect to us as elders.  Just as we were leaving she said something like…..your wish will come true – have a good year.

Blessed…and grateful I am.  Here’s to a brilliant New Year to you. May your wishes come true.