And so my acquaintance asked me: “What does it mean to be an Associate Producer?  What do you need if you want that job?”

I thought of that question as we were preparing for – and then producing – our reading of MISFITS at Carroll University a couple of weeks ago.  I suppose I’m being a teensy bit whiny, but the first response that came to mind was: “You have to remove the phrase ‘It’s Not My Job!’ from your vocabulary!”  Because, candidly, the job means doing whatever needs to be done. 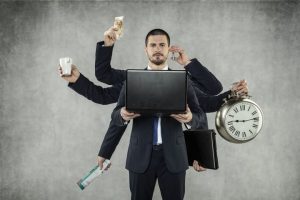 There are some of the predictable parts:  Greeting the actors as they arrive for rehearsal.  And then, on performance day, greeting the audience members.   And then there are a series of “back-office” tasks, predictable but unheralded.  As the actors were convening, it occurred to me that they would, sooner or later, be looking for the restrooms.  I didn’t know where they were – which means they didn’t know either.  So I went on a searching expedition.  Happily the facilities were nearby.  But they were down a dark hall, with no obvious sign.  So it was good I investigated.

And then there are the utterly unpredictable developments.  In the course of the rehearsals, the music director got a sense that a key song in the show ended too abruptly.  But what to do about it?  During the final, Saturday morning rehearsal, he had “a flash.”  What if the song ended with a sixteen bar reprise of an earlier number.  It would work!  But how to actually make that happen.  As the group broke for lunch, he grabbed a piece of blank paper, scratched out the five lines of the treble staff, and penciled in the notes and the lyrics.  And….he handed it to me and asked me to find someplace to make a copy! 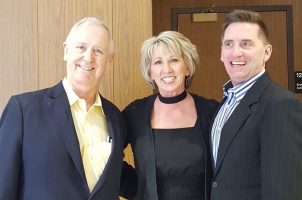 After some snooping, I was able to borrow a key from a college employee, locate the copier, and duplicate the page.  In the final half hour before the show, he went over the new addition with the soloist.  The accompaniment was only in his head!  But she had the page with the penciled tune and lyrics.  And an hour later, the audience heard the flow of a song that sounded like it had always been there.

And meanwhile, also during lunch, one of the actors felt a migraine coming on.  She knew from experience that she could not altogether avoid what was developing.  But she also know that a specific soft drink would slow down the process.  So….there I was, off to the car, using WAZE to find the nearest drugstore, locating the exact beverage and rushing it back.  It worked.  And so did she …. Splendidly!

I will admit I had help.  I had a lot of help from Carolyn Feltus-Belun, our Assistant Musical Director.   She did just as many odd jobs as I did. From hanging up direction signs, fetching lunch, checking audience members in – lots to do for everyone.

No big deal. Just what an Associate Producer does.  Anyone can do it. Just so long as they know that everything is part of the job!”

Love you Tim and Larry!!! CPA Theatricals is soaring to new heights because of true professionals like you