Tech rehearsals can be brutal! 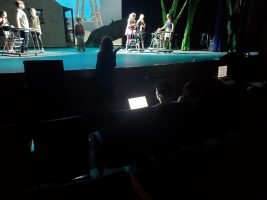 Tech rehearsals can be brutal.  Brutal for everyone.  I remember being in a tech rehearsal for five hours and that was just for the first act.  What is a tech rehearsal?  This is the first time where all of the production elements come together.  The director gets to see the costumes under the lights, the sound engineer gets acquainted with the actors and their speaking and singing levels, the lighting designer gets to show the director his vision of the show and the actors get to work on the set.  All this at one time.  And all of this just a few days before there is an audience. 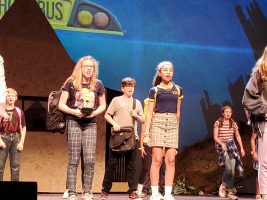 The actors at this point, are solidifying their characters, the choreographer is making changes and adjustments due to the new set and lighting elements.  It is stressful, chaotic and ….well….boring.  The actors sit or stand on stage for a LONG period of time while the technicians, designers and director make decisions. 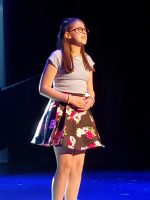 I was at the technical rehearsal for GIRLHOOD last week.  WOWZA.  Twenty-three 10-13 year olds, a staff of about 10, oh and two women who came in to solve the costume crisis  Crisis? Yep, the costume designer had fallen ill and had to leave the show.  Nothing fatal, but certainly debilitating.  So these two gracious women stepped in and tried to fill the void.  Thank goodness               GIRLHOOD is a story of contemporary girls becoming women.  That meant that, in many cases, the actors could use items from their own wardrobes.  I’d hate to think what would have happened, if it was SHREK! 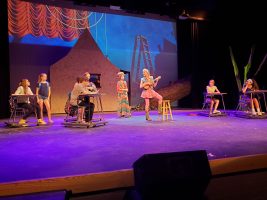 Through all of this, I was on hand to answer questions, solve problems and give input when asked.  The director asked me to please take notes and then share them with her afterward.  I gave a handful of character notes to her for the actors, answered questions from the women doing costumes and approved cuts and changes in the script.  But, mostly I stayed out of the way.  So, I was able to take some pictures.  Here they are! 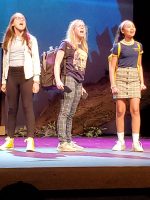 GIRLHOOD will have its pilot production at BRAVO PERFORMING ARTS in Oak Park, IL on July 9, 10 and 11th.  Click HERE for information.  Tickets can be purchased at the door.

« The results of a reading…
GIRLHOOD – take a peek »