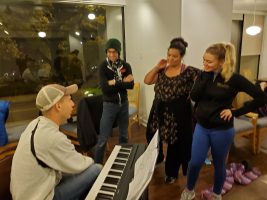 OK, so the cast rehearses with the Director and his team which includes the Choreographer/Associate Director and Asst. Director/Choreographer.  They usually rehearse with some props but no costumes, and certainly no lighting, sound or special effects.  Once they have fully blocked the show – meaning all of the movement has been determined – who moves where on what line – the director is ready to share the show with the design team.  This run through is called “the designer run.”  Of course, we are talking about THE LAND OF FORGOTTEN TOYS!

Usually, it is the first time the sound, set, costume, prop and lighting designer see the show.  All of these folks were at the first read through and may have had discussions with the director along the way, but this is the time for all of them to be in the same room along with the cast.

We had the designer run last weekend.  All the folks mentioned above were there.  And others as well.  Representatives from our marketing and public relations firms were there and the social media consultant was also there.  And of course…..all of the assistants, the technicians and the technical director were there.  Here’s what happened. 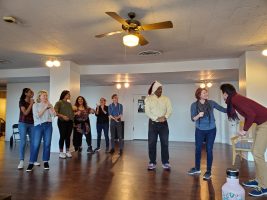 The room was packed.  Every seat was taken and some were sitting on the floor. The cast was preparing to run the show, as was the musical director who is also the accompanist for rehearsals.  They were placing their props and asking questions of the directing team.  And the child supervisor was rehearsing dance steps  with the children in the background.  And……I was perched on the edge of my seat.  For this was also the first time I saw what they had been rehearsing.

Then.  BAM.  The opening chords of the music and the cast walked on stage.  A hush ran over the design team as we watched a young Grace look up at her mobile.  The directing team chose a very clever metaphor or staging concept for the opening moments.  It was quite chilling.

As the run continued the lighting designer was seated next to the directors.  And they whispered almost constantly about moments and lighting effects that needed. The lighting designer typed furiously into his computer and asked questions along the way.  Meanwhile, the cast plowed forward with the show.  Of course, there were places where we had to stop. An iceberg – a set piece – was in the wrong spot and needed to be moved. Safety first, of course.  Then  – on with the show.

Afterward there was applause and lots of loud conversation.  Everyone seemed thrilled with the run.  I looked over and the Assistant Director had pages of notes.  So, did the costume designer and the sound designer.   It was my job to evaluate the show as a whole.  Was I confused at any point?  Did something not make sense?  Did all of the script changes and adjustments flow?   Thank goodness – they did.

Now…onto the next phase.  We get into the theatre and start tech rehearsals.   This is what creating a new musical looks like.

« The Leadership Team
The First Preview »