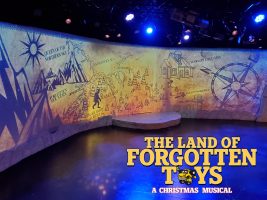 The children needed new pants and Santa needed a new shirt.  Allergy free laundry detergent was needed. Go to Target.    The understudy for Santa was going on and we needed a Santa beard/wig for him.  Go to Chicago Costume company.  The technical director needed a few things to finish the set.  Go to Home Depot. Gotta make sure the theatre is clean and ready.  Go to the theatre.  Meet with the director.  Prepare the pre-show speech.  Then run home to change clothes, pick up the large lobby poster and head back to the theatre.  It was first preview.

First time an audience would see this version of the show. First time the house manager would learn about when to seat late comers.  First time we would run the show without stopping.  First time new light cues would be implemented.  First time new costumes would appear on the stage. It was a day of a lot of firsts.

The cast was called early to rehearse a few things.   They arrived prepared and excited.

The theatre was clean, new masking hiding the props and off stage set pieces was hung, so the audience could not see them.  The volunteer ushers arrived – Roz and Steven.  Roz told me she is a substitute elementary school teacher.  Steven was an Assistant Principal for a middle school.  The stuffed the programs and prepared to greet the audience members as they lined up.  I took a few minutes to ask them a few questions.  What did they think of the stage with the projection and lighting?  What did they think the show was about?  How did they feel when they entered the theatre?   I needed to get feedback from as many people as I could.

I checked with the box office – 51 reservations.  I was thrilled.  Previews are typically not well attended, but I needed an audience to gauge how the show and the revisions were received.  Then, the pre-show music started and the audience started to enter.  Again, I asked similar questions to members of the audience. Then, I got the nod from the stage manager that we were about to begin and I was to get into position to make the pre-show speech.  Lights out – and I walked on stage.  And….the show began.