But what do they do?   Really.  Let’s start with the director.  The director is responsible for the overall vision of the show.  He works alongside the other team members to make sure the show has a consistent visual aspect that complements the style of the musical.  He works with the actors in each scene giving them “direction” about what the scene is about, how their character fits into story and holds a discussion about how best to tell the story.  He “blocks” the actors – meaning tells them where to stand, when to move and where to enter and exit. (I once worked with a director who had everything written down before we started rehearsals.  Every movement that the actor did on stage came from the director.  Truth is, that works well if you have very little time but is not a lot of fun for many actors.  It’s more satisfying to have these decisions arise at the end of some experimentation.) The director also works with the designers, producers and stage management team to make sure the show is ready for the audiences. 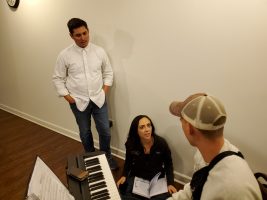 Hal Prince – one of the great musical theatre directors of all time – said he always started with a design concept.  He started the conversation for CABARET with the set designer.  Together they discovered a “world” for the show.  From there, Prince was able to visualize the rest of the show.

The Associate Director works alongside the director.  They bounce ideas off each other and test theories.  Our Associate Director is also the choreographer so she has to create, develop and demonstrate the dance movements in each song.  There is a lot of preparation that has to happen before the actors even start rehearsals.  And, of course, if, after the dances are taught, something does not look right…..it has to change.  Sometimes right on the spot!

The Assistant Director/Choreographer works in conjunction with the other leadership members.  She will demonstrate the choreography and perhaps privately teach some of the more complex moves.  She will play an important role in the technical rehearsals as she will act as the liaison between the actors and the other team members.

It is my job as Producer to let them do their job.  How many rehearsals have I been to?  None.  Yep, it’s true.  I come in once the show is preliminarily set.  I share with them when I am confused, what does not make sense, etc.  I will not sit with the team as I watch the run through of the show.  And, I encourage the leadership team to sit separately – to see another perspective.

Even though I have not seen the rehearsals, I must confess that I am excited….VERY excited and eager to see what these talented people have created.