The Power of Illusion and yet….so real!

The star walks on stage to thunderous applause.  The audience has paid huge amounts of money to see him perform close up….very close up.  He wears a black shirt and jeans, the set is simple – stark even.  He picks up his guitar, starts to play.  The audience is silent.  And then . . . he confesses,: ““I have never seen the inside of a factory. I’ve never worked five days a week – Until these shows.”  His confession – I’m a bit of a fraud.  It is done so simply, so clearly and the audience hangs on every word.

I was very reluctant to watch the Netflix taping of SPRINGSTEIN ON BROADWAY.  I have heard his music, of course and am aware of his politics.  He has millions of blue collar worker fans.  He has toured the world and written and performed songs that tell a heck of a good story.  But, I was not a huge fan. 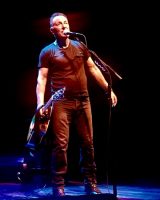 But I did watch it. For a huge star to start the show with this kind of confession was very courageous, dangerous even.  Yet, the whole audience was spellbound.  You see, his music is kind of a tribute to the working class.  The factory workers in New Jersey and throughout the USA.  He tells in very specific detail about his life growing up with a hard working, hard drinking father who worked in a factory all his life and a mother struggling to put food on the table.

He is a master story teller.  Yes, his music is great and when his wife comes out to sing with him – wooooo. But it is the detailed, nuanced recollections of when he was a child: going into the bar to tell his father to come home.  Or his starting the band with nothing and touring with so little pay for years.  Then of course, he had a big break.

But while his story telling is great….I also discovered that he is a great actor.  And when I realized that, then I was right at home!

You may have heard that the ticket prices were outrageous…you are right.  The highest price Broadway has ever seen, but thank God, he chose to share it with those of us who could not afford it.  Thank goodness Netflix was there.

Bruce, you really are “the Boss.”

« Rise up!
The Things You Learn Along the Way… »