The results of a reading… 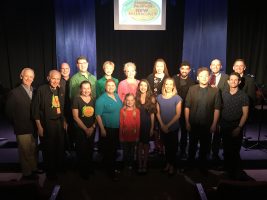 “I don’t think a compass works at the North Pole.” She was correct.

“You cannot see Polaris from the southern hemisphere.” He was correct.

“When do we get to see Grace have her “moment of change?”

These are some of the great comments that we heard from our reading of THE ISLAND OF MISFITS last weekend.  Let me back up a moment.

We were selected by the Florida Festival of New Musicals hosted by the Winter Park Playhouse to be one of six new musicals to have one hour readings.t.   I was scared, excited and eager to attend the reading and get feedback. The theatre hired union actors, the director and musical director – and they rehearsed for 15 hours without any of the creative team present.  Then, we all came together to witness the first reading.

It was most thrilling for our composer, Dylan MarcAurele, because in his entire career he had never been to a performance of his compositions where he was not involved as teacher, accompanist or whatever.  But I confess I was thrilled as well.

The festival scheduled  three performances of the show, for a total of more than 200 audience members. And it was my job to gauge what jokes did not get laughs, what bits worked, and to evaluate what new things the director and actors brought to the performance. WOW, did I learn some things.  I ended up with about five pages of notes.  Things like “new joke needed here” and “cut this section – it bogs down the show” and “make sure this is correct.” If a joke did not get a laugh at any of the performances, I need to replace it.  If an actor used an ad-lib at a spot that got a laugh, I added it to the script.

The performance was a one hour cutting of the whole show.  We started with the first part, eliminating two of the songs, then we cut to the finale.  The finale is a great number that reminds us all that there is always hope….”There is always a light.”

Are we done yet?  Nope.  In fact, with all those great notes, there’s even more work:  more re-writes, different jokes and …..even a new song.  After discussions with the composer, we decided that a new villain song is needed.  WHAT?   Yep.  That’s show biz!

« Surround yourself!!
Tech rehearsals can be brutal! »