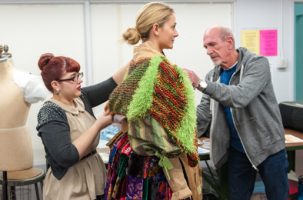 I was sitting quietly in the back of the costume work room, waiting for my time to be measured and to have my costume fitted.  I was young, just out of college, and this was a huge, important company I was working with as an actor.  Next to me was a mature actress that had decades of experience and was very beloved.  As we waited for our turn to get to work with the costume designer and her assistant, we watched a young man getting his costume fitted.  He was squirming and adjusting his suit as the staff was trying to assess and accessorize.  “Could you please make the sleeves longer?”  “Do you have another color tie?” “These pants are too big in the crotch area.” We could see the faces of the staff as they started to get redder and redder.  You see, the costume staff had about 2 hours to fit 30 actors with multiple costumes each.

Finally, the designer stopped and looked at the guy and said, “Does it affect your ability to do your job?” “No,” the guy said.  Then the overworked designer looked at him and said, “Then, get out – you are done.”

I was shocked and the actress sitting next to me, leaned over and said “This is a lesson to learn. Do not cause trouble.” And….I learned that lesson that day.

One of the things I do as a Producer most often is hire folks.  I hire actors, directors, writers, stage managers, designers and on and on.  How do I get these people?  In the case of actors, I sometimes reach out after I’ve seen them in shows I attended, other readings I have produced, etc.  But other than that, mostly I find the people I need to hire by referral.  And, even after I hire people, I do my best to “check them out.”

Recently as I was casting a show, I had a group of videos I had to review.  I asked my staff and consultants to help evaluate them and give me their feedback.  “Causes trouble” was one note.  BAM – I deleted the file.  “Erratic” was another note.  I knew this meant the person was on an ego-trip, focusing only on the self.  BAM – another file was deleted. “Unprofessional and unreliable” another note.  BAM – another file was deleted. And these were all very talented folks!

In the theatre – you do NOT want to be labeled these things.  And that lable can stay with you for a long time.  As my mentor, Ken Davenport, reminds me…..the theatre is a very small world.

Love your message!
I totally understand being a manager or “boss”
Been there myself.
Love you…Carol