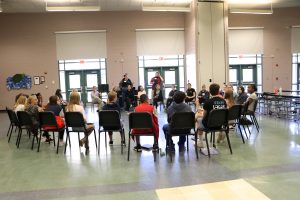 Twenty-three.  There are twenty-three kids in Bravo Performing Art’s production of GIRLHOOD.  “Well, I wanted to have about 34, but we were a bit under enrollment this year” the director told me. But, let me tell you – twenty-three middle school students is a lot.  I was at the first rehearsal.

First rehearsals are fun, exciting, scary, thrilling and nerve-wracking.  The director started by having each person introduce themselves, tell us their age, how many shows they have done, etc.  As we started, each student, some with great confidence and some hesitantly so, told their story.  One girl – S – said that she was 12 years old and had done 12 shows so far.  (Afterward, I went up to her and asked her to tell me about them.  She rattled them off and then looked me in the eye and said, “But, I haven’t worked professionally yet.”)

Then, the director asked me to talk about the show and I said something like this: 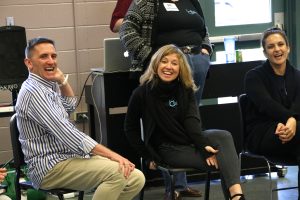 “It started with the title.  I found a flyer on the side of a pole when I was coming out of a restaurant.  GIRLHOOD in bold letters. I think the flyer was promoting a reading group for young girls.  I sat with that title for weeks.  I thought about what a great title it was, and I wondered if there was some way it could  become a musical.  Then a theme or structure came to me.  Let’s tell stories of girls becoming women!

“But, I’m not a girl!  So I started interviewing groups of girls.  Along with a female colleague, we heard incredible stories of strength, courage, humiliation, bullying and, of course, lots of social media anecdotes. From there, I created characters and scenes based on some version of those stories.  Then, we reached out to a wide range of composing teams and asked them to write one song for the show, because we thought the show would just be a song cycle with no thru line.  But as we worked on the show, we realized that some of the characters, their relationships and their experiences, could be a thru line.  So, we wrote mini scenes to tie some of the songs together.  The script you have now, is what we came up with.”

I told them I was thrilled to finally see the show on its feet.  I told them that the best part about working on an original show is that they get to give us input on how to change or improve the show. They all smiled and looked a bit scared.

Then, the director said: “This is the first rehearsal, so let’s talk about the script and music.  Who has not listened to the music and read the script?” Nobody raised their hands!!!  Every child in that room was prepared for the first rehearsal.  The director continued: “We have 19 songs to learn.  The opening number is complex and long, but it introduces us to the characters and the world of the play. Let’s get to work.”