I Sing The Body Electric!

As we watched the group of teens in the film start school by auditioning, then making their way through the trials and tribulations of dance, music, acting – and puberty – we laughed and cried.  And sat in stunned silence throughout most of the film.

We all identified with some or all of the characters.  We could all relate to the botched auditions, the sore bodies, the emotional highs and lows of show biz. The struggle to balance school work and dance class and rehearsal was real.  The craziness in our home lives was projected on the screen.   As we watched Coco sing the ballad “On My Own” we were stunned that she was singing a song that was the story of our lives.  Then we watched Leroy as he danced from deep within his soul and we nodded and swayed with him. As Ralph became a hit stand up comedian and then hit the skids we collectively took a deep breath.

And then, the finale.  How could they possibly end this film that could reconcile Lisa’s “almost” suicide and Ralph’s personal struggle with being gay? “I Sing The Body Electric” remains one of my favorite songs of all time. 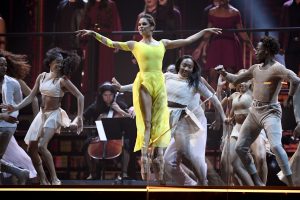 This is from my friend Alexandra Billings about the song and the movie: “The beautiful place this rests in me is sacred and goes very deep. When I first saw it, back when I was in my twenties, I identified with the kids. Their struggles, their fears and their joyful misgivings And now that I’m older, I still relate to the kids. Only now, I teach them. I’m in the room with them as they create and dream and bless each other and fight and argue and pick themselves up off the ground. It is thrilling to watch as you attempt to put together the humans and their stories. This is film at its finest. And the actors who took on this herculean feat, are the true soldiers.”

I have to share with you this clip, from the 2020 Grammy Awards.  It starts with a young star, Camilla Cabello, soon joined by Cyndi Lauper and Ben Platt.  Then Joshua Bell plays a mean violin and Lang Lang matches that energy on the piano.  But what took my breath away was Misty Copeland in yellow as she dances across the stage and into the very heart of the song.  Students join in at the end of the song.  And magic is made!

« Triplets and Trumpets!
Boldness……and a bit of a revamp »