It takes a Village – a HUGE village!

October 20, 2017 – Jim, Sarah, Derek, Mark and of course Tim and I gathered for a weekend of ideation about a new Christmas musical that I had dreamt of creating.  Perimeters were set, characters were detailed and then the announcement: “allow fantasy to enter into our conversation.” From that weekend a basic story was created from which THE LAND OF FORGOTTEN TOYS was emerged.

I always knew I wanted to work with Dylan as composer.  He is imaginative, flexible, brilliant — and writes incredible music.  We talked, and I told him that we would choose the other writers together.  Soon, Jaclyn and Jennifer joined our team. Then, a draft of the full story, some new characters….and the first twenty minutes were created. 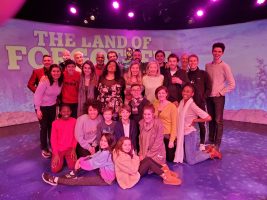 Cast, musicians, crew of the 2019 production of THE LAND OF FORGOTTEN TOYS

Courtney, Tyler, Maisie, Mike, Sam, Liz, Ellie, Owen, Andrew, Jim, Lynne, and Sarah came together and read/sung through the opening of the show, which included dialogue and three numbers.  And then…immediate re-writes, story revisions and feedback from that first reading.

Three months later, Desiree, Alex, Ella, Anna Marie, Missy and Jake joined us for the next section.  We heard the “villain” song for the first time and met Schmedrick. This time Chris joined us as a consultant. A section of dialogue was cut immediately and in a private meeting the toys were developed.

Four months later, Caitlyn, Mary-Margaret, Alex, Anna Marie, Nicole, Maisie, Jake and Frankie came together and we heard the end of the first part of the show – the complex “Montage” was heard and refined. Our hero, Grace, was given more to do and her friend Nikki was expanded.

Months later, in NYC, Kim, Zoe, Jorge, Tiffany, Liz, Joshua, Katherine and Jose reported to an empty studio early on a Saturday morning, along with Adam and a prestigious NY director, to hear the whole first part of the show and the beginning of the next part.  A very complex number (that was later cut) was rehearsed and developed. The “I want” song – “Far Away From Here” was refined and sung by two different actresses. Then a full day of story meetings.  What worked, what did not, what roles to beef up, what roles to diminish.  And finally let’s cement the ending.

October 2018 – ONE year after the ideation weekend we had a full show.  Annie, Mary-Margaret, Maisie, Jake, Alex, Anna Marie, Nicole and Frankie joined us and rehearsed and read through the last section.  More re-writes, more meetings and then a first draft was complete.

I brought on a story consultant, Jeffery, a dramaturg, James.  They contributed wonderful insights – and more than a few honest challenges. And throughout the process had the invaluable advice of two highly placed members of the licensing industry – Jim and Michael.  So, several months were then devoted to revisions.  Then, in March, 2019, a full reading of the revised script was presented in Milwaukee.  About 100 audience members attended.  Some of the cast members who had participated before were back on the stage.  And they were joined by Liz, Quinn, Doug, Reece, Cassandra, Kara, Raven, Edward, Amber and Kayle.  Two actors were 8 years old!  Carolyn joined us Assistant Music Director.  We even tested the first set of projections by Kevan. Karen was asked to consult on the show.

The audience response was enthusiastic.  But that didn’t mean it was a finished product.  So, more revisions!  Then a reading at the Festival of New Musicals in Florida added another 12 actors and crew to our gang, while Michael, Roy and Heather joined the team of producers and directors who have guided us along the way.

Finally, we mounted a full workshop production in August, added some other cast members as well as lights – designed by an old friend of mine, Bill — props, costumes by Christina and a handful of stage managers and assistant producers, etc.

All this time. And all these people! Actors, writers, producers, directors, designers, stage managers, ushers, parents, musicians, musical directors, and of course – the audiences.  I am sure I have forgotten some, but I do know that I am grateful to all of them.

It does take a village to create a new musical.  A HUGE village.

« The show is on! Is the work done?
Triplets and Trumpets! »