The show is on! Is the work done? 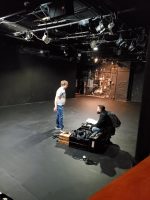 I was struck that many folks presumed that our work was done once the performances of the show started.  In a way, that made sense.  For the most part the “creative team” are done when the show opens.   The designers of set, lighting, projections, costumes, props – all these folks are paid on opening night, since the presumption is that their work is done.  Even the director is finished!  From that point on, it’s the job of the Stage Manager, to assure that everything stays the same, that the show you see in the third or fourth week is the show that took place on Opening Night.

So one might suspect that the producers are done, too.  Not so!  I found myself very busy.  Every morning, I would look at a spreadsheet showing all the information about ticket sales.  The number of tickets sold for each upcoming performance, of course.  But also the number allocated to various “sub-sellers” such as HotTix and Goldstar, “comps” provided to actors, donors, etc.  Based on all that information, we would refine allocations.  Saturday has strong sales; leave it alone.  Thursday night is thin….offer some additional comps to industry contacts.  (After all, we want a strong audience experience at every show.  And the more folks that attend, the more buzz there will be in the community!)

I’d look at the details of box office sales.   We wanted to try to be present whenever people we knew would attend.  It wasn’t always possible, but we tried to be in the lobby to greet them.  And often that meant staying for the performance, as well.  I think I saw the show sixteen times!!!

And are there any other ways to encourage sales? That meant checking in with our consultants in marketing, public relations, and social media.  Throughout the run we had weekly meetings with these folks, and often additional contacts by phone or email.  These days it is amazing how complex the internet world of promotion is.   So there were continuous contacts with Facebook, Google, etc.  It never ended.

Well, it did.  The last performance!  We paid the actors and wished them well.  We stood back as a small army of technicians dismantled the set and packed up.  Our contract stipulated that the space had to recover its clean, neutral look within twelve hours! So everything was removed – to storage or to the dumpsters.  And – finally – the floor was repainted a flat black, erasing all evidence that this show had ever been there.  And then we headed for home!