What are the GIRLHOOD composers up to now? 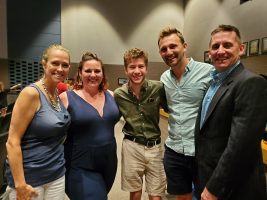 We’ve always known that we’re blessed by the talented composers and writers who work on our shows.  But lately there’s been a flurry of confirmation about that.  Last week I learned that Dylan MarcAurele, a composer and musical supervisor for GIRLHOOD has been named a 2020-21 Dramatists Guild Foundation Fellow.  Thinking about that, I decided to check in with other composing team members from GIRLHOOD and see what was happening in their lives.  Here is a recap of a few:

Jan Roper received the L.A. Scenie Award for Musical Director of the Year for 2019-2020. She also won the 2020 “Raise Your Voice” Playwright Competition for a new work called “América Tropical”.

Aaron Latina signed a 6-picture deal to score all their films for a production company in Atlanta.

Lara Filip started a new production company to house her touring kid’s shows and the “Walking Plays” that she produces at Morton Arboretum and beyond.

Alex Petti has been accepted into the BMI Lehman Engel Musical Theatre workshop as a composer and has continued to develop his upcoming projects, “The Trouble With Dead Boyfriends” and “Alex Petti And The Nervous Wrecks Present: The Hometown Tour.”

Joe Stevens and Keaton Wooden had a reading with Tony-Winner Michael Mayer in February, and Keaton is co-writing a digital musical with Grayson Selby and Jack Newell, head of the Harold Ramis Second City Film School.

Joan Bauer’s Newberry-awarded best-selling novel HOPE WAS HERE film adaptation is currently in early stages of development with exciting news to be officially announced soon.  Also, her new novel for young people “Raising Lumie” was published in June and has received great reviews.

Oh, and one more item about Dylan MarcAurele. He was also on TV. His musical theater parody Instagram page @RhonyMusical got some major attention. As a result, he was recently featured on national television for Bravo’s 200th episode of The Real Housewives of New York City.

Amazing, ha?   I am thrilled to be able to say I worked with all of them.

« When in doubt…Pivot!
The Moment – it happens and everything changes! »