Backstage at THE MOMENT

This blog is written by a guest contributor – Maddy Buchta.  Stay tuned for some great news about our show MILEY CHASE THE SCIENCE ACE.  Till next time – Larry Little, Producer

Theatre is known for its spectacle, and a part of that spectacle that people often overlook is a production’s marketing.  The first impression of a show is it’s marketing, whether it be posters, programs, or pages on a website, so it’s very important that the designs are engaging and cohesive with each other and the show they’re representing.  This is where someone like me comes in.  I served as the Media Manager for Milwaukee Metro Voices production of THE MOMENT where I was primarily responsible for social media marketing for the show.  I also was in a unique position as I was also an actor in the production, which I found to have advantages and disadvantages. 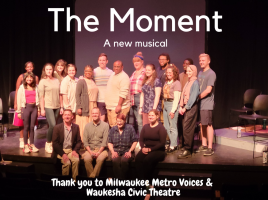 Being an actor in the production meant I was directly involved in the behind-the-scenes process, which makes for some great social media content.  Much like the reason you probably are reading this article, I find that audiences enjoy seeing the process of a show from start to end.  This, however, can also be a disadvantage.  A challenge I had to face was balancing when to focus on social media and when I needed to be rehearsing.  As much as I tried to plan things out ahead of time, I still had to create most of the stories and posts in “the moment” (pun intended).

Another advantage is investment.  In college, I often had to balance acting and marketing shows, and I found that allowed me to have a more in-depth understanding of the show’s themes, characters, and plot.  Someone on the inside is going to have a much better understanding of a show than someone on the outside.  I felt that I was able to more accurately promote THE MOMENT because I understood the characters and themes from a unique perspective.

As much as I love acting, I love the marketing side of a production just as much.  Theatre lives in “the moment” (pun intended again), which means once a performance is done, it won’t ever exist again.  Posters, programs, websites, and social media are tangible and serve as reminders of the amazing experience you had at the theatre.  I’m grateful for having the opportunity to make THE MOMENT last and I hope to continue creating content that showcases the magic of the theatre.