MILEY CHASE THE SCIENCE ACE is ready for action!  The songs are written (by the amazing Dylan MarcAurele) and recorded in a professional production studio.    We had a blast recording them, all while following safety precautions! You can check them out HERE. The script is done – Mike Ross outdid himself. It is hysterical, poignant and moves like the wind. The initial illustration artwork is done (after many revisions). Finally, our reading using 10 year old actors revealed some spots for adjustments – and they gave us some great ideas about Miley’s next adventure as well. 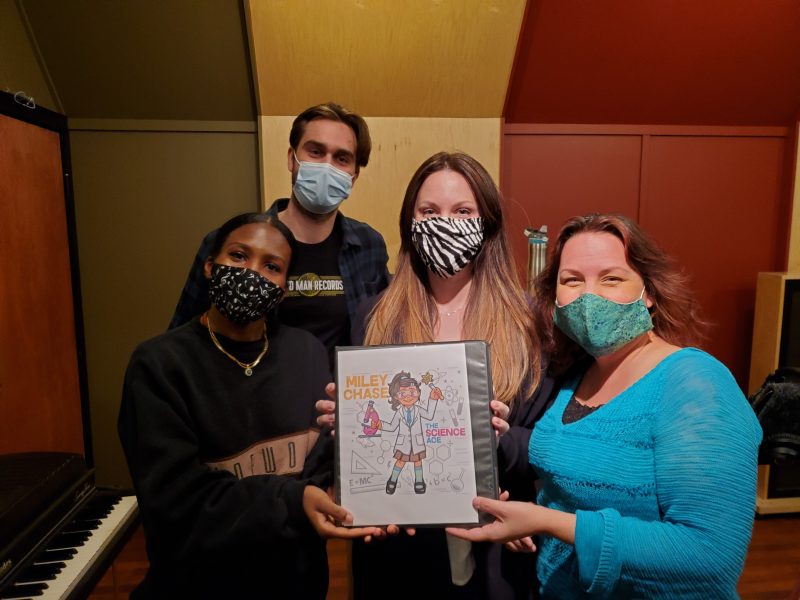 Let me tell you a little more about the show.  The leading character is Miley Chase.  She is a 6th grade science wiz, but no one knows it yet.  She has a natural ability to understand and analyze complex science issues.  She is a very hard worker and can concentrate under adverse environments.  But she has no friends.  She is lonely and does not relate well to others.  Over against Miley is Tyler.  Very popular, he is arrogant and jealous of Miley.

But most of all, in this blog I especially want to share how I came up with these names.

I created the name Miley based on two child actors I worked with on the Chicago production of THE LAND OF FORGOTTEN TOYS in December 2019.  Our evil elves were played by Maya and Lilly.  Even though they were evil on stage, they were very mature and sweet to work with. So, I combined their names to create Miley.   In the same way, I named Tyler because of a young actor named Kyler.  Kyler is a superstar.  He went on for two different roles in THE LAND OF FORGOTTEN TOYS and understudied another.  Imagine that!    And while I was thinking of these wonderful young actors, I remembered Joe as well —  a talented, cool and very funny young man.  So I named JoJo the T-Rex in MILEY CHASE after him.   I hope this new show honors these wonderful young people.

Last, I want to share with you something that an adult actress said to me as we were recording the show.  “I love Miley!” she said.  “I want to play her.  You know, this show could be TYA.” Hmmmmmmm.  What is TYA?  Theatre for Young Audiences.  TYA shows are adult actors performing a show for an audience full of children.  This is not something that I have experience in as a producer.  But as an actor, I made a lot of money performing in TYA shows.   Although MILEY was originally envisioned as a show performed by child actors, maybe a TYA version would work as well.  Our shows that CPA Theatricals develops are “family entertainment,” After all, where the audience is filled with adults AND children. So, this may just be an exciting alternative.

MILEY CHASE THE SCIENCE ACE is ready for the world to see.  Are you ready?

« THE MOMENT – Video from First Scene
THE MOMENT as a stage show. »