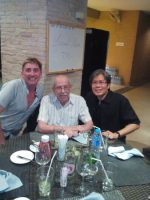 Sometimes you find mentors in the strangest places.  Sometimes you pay them, and sometimes they become friends.  Mentors are very important to me, and I listen to every word they say.    I have had some great mentors in my life, but none as special as John Glines.

“We were in the middle of a huge success Off Broadway with TORCH SONG TRILOGY.  We had worked on the piece for a few years with Harvey Fierstein and it was selling like gangbusters. So, the next decision we had to make was – is the show ….could the show…..go to Broadway?  I worked with my partner to gather financing, get a theatre and it all seemed like it was a go, but I was hesitant.  Finally, my partner said to me, why don’t you call Hal? He meant Hal Prince, of course.  And, I thought, I don’t want to bother him now.  But I did.  I called him one afternoon in December, and the secretary put me through right away.   Now…a bit of background…..the year was 1981 and Hal Prince just had the biggest flop of his career – MERRILLY WE ROLL ALONG.  So, you can see why I was hesitant.  Anyway, Hal and I chatted briefly and finally I said, Hal, I need some advice.  Should we take our show TORCH SONG TRILOGY to Broadway?  He did not hesitate and responded “I just closed a show after 16 performances, you have the biggest Off Broadway hit in years and you are asking ME?”  I said thank you and we hung up.”

The moral of the story is that sometimes you already know the answer to tough questions, you just have to listen to your gut.

But, perhaps the best advice John Glines gave me was when I was shaken by disagreements with my other collaborators.  He looked me right in the eye and said something like “Don’t shy away from those challenges!  It is the abrasion that creates the pearl!” WOW.

John passed away last week with his husband, Chaowarat Chiewvej, by his side.  Playbill, Broadway World and several other theatre publications wrote beautiful biographies about this brave, talented and award winning Broadway producer.  He was all of those things.  But, in addition, he was my mentor and my friend.  I will miss him very much.