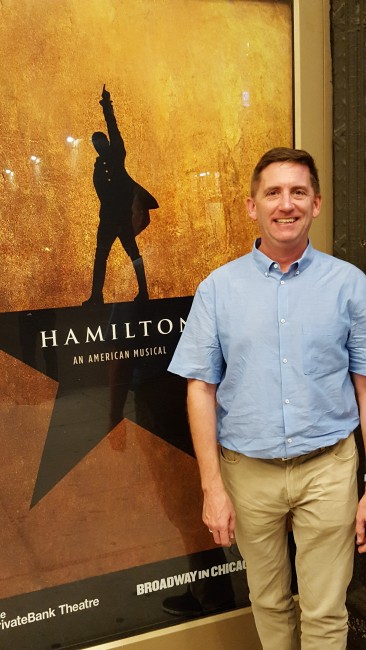 I was in a summer theatre training program  and I was in rehearsal for “Twelfth Night” (yes, there was a time when I did plays as well as musicals.)  And our teacher, who was a mature student studying advanced acting at the University of Wisconsin Milwaukee, was directing the Shakespeare comedy.  She was giving direction – an acting lesson really – to the actor playing Duke Orsino.  She said, “People with a lot of power (Kings, Queens, etc.) don’t move much.  The more power they have, the less they move.”  I have remembered this comment through all these years – and she was right. Watch the movie Elizabeth – When Elizabeth (Cate Blanchett) is in court she barely moves at all – only her mouth.

Well…where is this going?  I finally saw HAMILTON last night.  After all these years and months, our tickets arrived and I saw the show that I had been dreaming of for quite a while.  And here are some of my observations:

The woman behind me in the theatre said, “I have been listening to the music for over a year and I  never imagined it would have been staged like this.”  She was right!  I had trouble sleeping last night because I kept “seeing” the show in my mind all over again.

What are/were your thoughts about HAMILTON?  Love to hear them.