MISS SAIGON in the beginning and now…

The grainy video starts out with a very young girl asking a musical theatre genius for his autograph. It is an audition for the new musical from the creators of LES MISERABLES.  Their new show – MISS SAIGON – needs a young Asian woman to play the lead role. And after multiple auditions, the creative team, the producers, the casting directors have narrowed the search to a few girls.

It is a very demanding role.  The role sings 13 songs in the show and must do 8 performances a week.  Someone young is needed – but not too young.  She must have experience and she must have a trained voice, otherwise she will injure herself.

Now, back to the video – the girl (a 17 year old Lea Salonga – who looks much younger) is told to sit at the piano with the composer and learn a song from the show.  We see her listen to the difficult melody and hear the male part, then…..she sings…..lightly….sweetly….but Oooooooooooooooo so beautifully.  We see the faces of the creative team in the room……we continue to listen to her sing the rest of the song.  A star is born.    (One other sweet detail from this story: Lea was an innocent girl from a conservative family.  So her mother stayed with her and traveled with her throughout the course of her Broadway debut performance.) 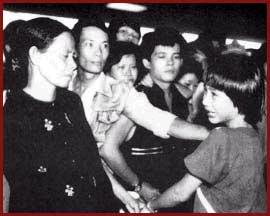 The idea behind MISS SAIGON comes from a photograph. The photo is taken during the time of the Vietnam War.  It shows a mother saying goodbye to her very young daughter.  So much emotion, so much conflict, so much drama in one photograph.

Many times the role of Kim in MISS SAIGON is shared by two actresses  because it is so demanding. I remember seeing a matinee production a while ago.  The two actresses playing Kim looked very different.  From the photos in the lobby and in the program they could not have been more different. One was short and innocent and the other one was tall and slender.  Both were beautiful in their own way.  After the first act, the intermission was very long. Then someone came onto the stage and announced that the actress playing Kim had taken ill. But that the other actress playing Kim, scheduled to do the evening performance, had been called to the theatre, and she would go on as Kim in the second act.  I was thrilled out of my mind.   I would be able to see TWO different actresses play the role in one performance. And you know what?  They were both magnificent!

MISS SAIGON is back on Broadway this year, and it is up for two Tony Awards!  This time Eva Noblezada plays Kim, and competes for the role of Best Actress in a musical.  She is the latest incarnation of a wonderful, beautiful role!