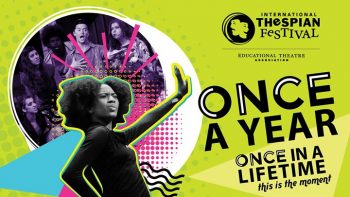 Yep – 5,000 theatre students, teachers and others are gathered in Lincoln, Nebraska for the International Thespian Festival.  I am here, along with my colleagues from Theatrical Rights Worldwide (TRW) to promote 57th NATIONAL MATHLETE SUM-IT.

This festival is a combination of workshops, auditions for colleges, performances and exhibits.  TRW sponsors an event called Thespian Musicalworks – which is a student-written musical that will be performed at the end of the festival.  With a NYC based director/choreographer, musical director and dramaturg, the students were getting to work with serious professionals.  Last night was the auditions, and I was asked to sit in for a while.

Now, I don’t like auditions when I am producing a show…..so, I did not know what I was getting into. But I agreed. I sat through 36 student auditions, and I am still in shock.  The students had to prepare a song, and then tell us a short story about their journey here.  All in all, each got about 3-5 minutes to show themselves to a group of professionals.  First, everyone that I saw could sing…and sing WELL.  Some had sheet music, some sang acapella, but most had their music on their mobile telephone.  They simply connected it to a Bluetooth speaker and ta da – instant accompaniment.

Each clearly had auditioned many times before – I could tell from their manner, their vocal training and their comfort in the room.  These students (almost all high school) were the best of the best from around the world.

Yes…around the world.  From the 36 I saw audition, three were from Singapore, two were from African countries, and several more were from outside the USA.  They traveled hours and hours – some on a bus, some in a car, some by airplane.  But ALL of them wanted to be there.  I was so inspired!

The opening event was a screening of a movie – “Purple Dreams.”   The movie documents the multi-year journey of an arts school from North Carolina and their dream of producing the musical THE COLOR PURPLE. Afterward, there was a talkback.  The house was packed and the audience enraptured.

Today, I meet with the teachers…..

« You’ve heard of a triple threat in musical theatre…but..what about this??
FROZEN, Jr and young girls! »