I am in the process of hiring a stage manager for a workshop production of GRACE & THE ISLAND OF MISFITS.  This workshop will be produced in February 2019 – seven months away – and I have to hire a stage manager now….a bit unbelievable to me. 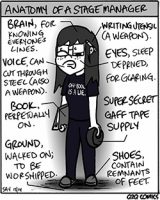 Now, it is my job to hire the staff for my productions and workshops.  I start with a director and ask them “who do you want to work with?” Then I hire the staff.  Sometimes, the director will say, “I can work with anyone.” Then it is up to me.

When I interview a stage manager, I always say the same thing.  First, I remind them that they work for me and that I want to be kept in the loop for any problem or development.  Second, I tell that that it is their job to solve problems and not just tell me about them.  Third, I tell them that my shows start on time. Unless there is a theatre emergency, my shows must start on time (and most of the time they do!)

A good stage manager is not noticed by the audience at all.  They silently carry out their tasks of managing the actors and other back stage crew as well as coordinating the performance with the front of house staff.

My best experience with a stage manager happened recently.  The woman was very professional during the rehearsal process.  And at technical rehearsals she was extremely quiet and reserved.  Then during performances she was unbelievable.  She solved problems before they became serious and she worked really well with all of the staff. After the run, I received compliments about her performance from almost everyone.

What a joy that was.  Let’s try that again!

« It’s the story that matters!
Marketing for family entertainment »