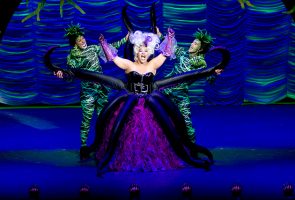 What do an octopus, a mad nuclear scientist and a man-eating plant have in common?  They are all great villains in musical theatre. As we are working on our Christmas show, we are looking to create a villain for our story.  I love villains in the theatre.   The more colorful, meaner and more angry they are – the better!

But, the villain generally has something about them that makes the audience “feel” for them.  Sometimes it is because they are misunderstood, have been abused or can’t help feeling jealous.  Javert really believes in the law.   In ANNIE, Mrs. Hannigan is trapped in the depression just like everyone else. She has no choices.  And sometimes they are just plain mean.

Here are some of my favorite villains in musical theatre.

Ursula in THE LITTLE MERMAID – Ursula is an octopus and, boy, is she colorful.  Usually she is painted in green and/or black and when she is mean to Ariel, the audience just hates her.  She has a spectacular song “Poor Unfortunate Souls” that very clearly tells of her intention to negotiate a deal with Ariel to give up her voice and in return she will be able to walk on land with the humans.  It is a great example of the song revealing the plot through the lyrics.

Dr. Sedgwick in IT’S A BIRD, IT’S A PLANE, IT’S SUPERMAN – Dr. Sedgwick is convinced he has been passed up for the Nobel Prize because others have stolen his work.  So, his song “Revenge” is about getting even with everyone by destroying Superman!  It is a fun song (and the score is great) in a show rarely produced. 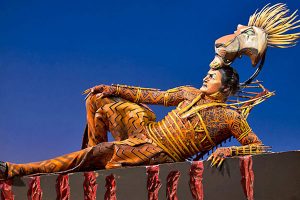 Audrey 2 in LITTLE SHOP OF HORRORS – The audience actually sees Audrey 2 (the man-eating plant) grow throughout the musical.  It starts as a small potted plant and in the end covers the entire stage and sometimes the audience. I remember seeing the original production Off Broadway and having to fight my way out of the theatre because there were so many vines that fell on the audience at the end of the show.

Scar in THE LION KING – This is really the story of Cain and Abel – one brother killing the other.  Mostly over jealousy.  Scar is a meanie surrounded by hyenas who encourage him and carry out his evil orders. But it gets even worse, he convinces young Simba that he is responsible for his father’s death.   Scar is very dry and sarcastic (which adds a much needed comic element to his character.)

What are your favorite villains in musical theatre?  Any advice about creating a villain for our Christmas show?

« Broadway, Off Broadway and Off Off Broadway…
Upcoming New Musicals by CPA Theatricals »