Helpless, Satisfied and a Football Game? 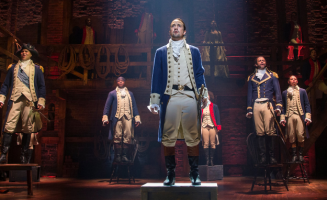 Well, that is what I will say about the movie version of HAMILTON that was just released by Disneyplus.   As I watched the magnificent camera work, I was reminded of the “genius” of the show.  Not only the lyrics and music (every Founding Father gets their own style of music??  Come ON!!) but the staging.  The seamless transition between HELPLESS and SATISFIED is breathtaking.  It was a wonderful treat for the July 4th holiday weekend.

But, I also want to share another treat that happened.  As we all are aware, we are a country in transition.  A country deeply divided.  A country ravaged by a deadly, new virus.  A country begging for peace and compassion.

We live in a high rise on Lake Michigan.  We have a beautiful beach with a large park right in front of our condo, so I try to walk in that park several times a day.  Yesterday, on July 4, the park was busy.  While most folks were careful to keep some distance, they were still enjoying the holiday. There were people swimming, sunbathing, reading, doing yoga and playing sports.  A group of young adults were playing tag football.

This is quite common, but something struck me about this group.  The players were diverse – both  women and men playing.  And it was very culturally diverse: Black, white, Hispanic, Asian. There was even a woman in a hijab playing.  It struck me as so special!  So wonderful!  So inclusive!

They were laughing and having a great time.  Whether they knew how special that game was – I don’t know.  But, I do know that it was special to me.  It was a great example of what we as a country, a great example of what we – who create theatre – try to do.   It was an image of what the founders of our country sought, an embodiment of what the words and music of HAMILTON proclaim, a mirror of what the gloriously diverse cast of HAMILTON manifests in every performance.

Magic on the stage!  And magic in the park!

Stay well and be safe.

« Pilot Productions of THE MYSTERY OF CUSTODIA
EDTA releases guide for reopening of school theatre programs! »