A couple of years ago I was producing a pageant.  We needed to fill the time when the contestants were changing their costumes.  I did some research to find some songs I could use.  I wanted something that was visually stunning and very different from the rest of the show.  Suddenly I thought about “I am Changing” from DREAMGIRLS.  I liked the number because it had its own quick change in the middle – mimicking what was happening backstage!  I thought that would add some spice to what is normally a boring transition.  It worked.

The project also got me thinking about the history of quick changes in musicals.

I discovered that quick changes have been around for centuries.  For example, magicians and wizards used them to shock their audiences in traveling shows.

I also learned that currently there is VERY little information about how to create a quick change costume; maybe those magicians intended to keep it secret!  But eventually I happened upon a few of the “tricks.”  I learned about magnets, weights and the “double costume”.   A double costume is really one costume (the “end result costume”) that is under the first costume.  And the end result costume is usually put on FIRST, then the first costume is put over the end costume.

Make sense?  No….?  Don’t worry, I could not understand it until I saw it for the first time.  But, what I will tell you is that magnets play a huge part of the “magic”. Yep…magnets – they are strong, can be used over and over and most importantly, are cheap.

Here are some of my favorite costume quick changes in musicals: 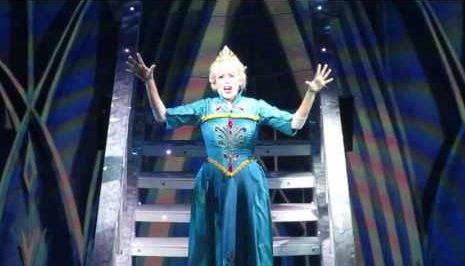 Of course, “I am Changing” from DREAMGIRLS, is my Number One Favorite.  This one still thrills me.  In the middle of the song, Effie changes from a coat into an evening gown.  The scene shows her character going from a nobody to an established nightclub singer – the costume change is not something “extra.”  It’s an inspired tool for advancing the plot.  Take a peek HERE, where the magic happens at about the 3:00 minute mark.

But then, sometimes quick changes go wrong…very wrong…FROZEN is the new musical from Disney.  Of course, we all saw the movie and loved the music and magic, but how do you put that on a stage?  Disney found a way.  BUT, take a peek at what can happen right and wrong in this video.  It’s a split screen, showing how the change SHOULD work – and how it actually transpired on one occasion!  I think I’ll check my tie an extra time today!

Other quick changes or secrets about changes?  Love to hear them.

I find that the key to costume changes in theater is to have knowledgeable and focused dressers. The last thing an actor needs is to be worried about a costume change. The dressers have to be fast, focused and fearless. They have to know how the costume works, and how it goes on and off. Having ample time to get the costume ready before the actors is even done with his or her line is very important. It doesn’t matter if you are standing off in the wing for what seems like for ever, at least you are ready. In our recent production of Funny Girl Fanny Brice has about 5 quick changes that happen in less than a minute. One quick change happened in less than 30 seconds(Off Stage). As the curtain was closing I followed the curtain to Fanny helped her down the stairs started to unzip her dress as she is walking she met the other helper in the wing. When we met the helper at the wing Fanny put her arms in the dress and the helper wrapped the dress around her as i was taking the other dress off. I attached the back of the dress together and out she went for her next scene. There was hidden Velcro all down the back of the second dress so that all the actress had to do was stand there and we did everything. I as well as the helper had practiced that many times before the run. Those quick changes are scary, but also thrilling. It gets a little hairy when a wig change is involved as well. I have used magnets, and Velcro, which I hate to hear on stage, and snaps in previous costumes. It all depends on how fast the change is and what they are wearing. Another good solution for a quick change is layering. It can work for guys, but can be tricky for women if the dress underneath is longer than the dress on top.

I have been involved many productions that required quick changes, and being the costumer for those shows i had to come up with different solutions.