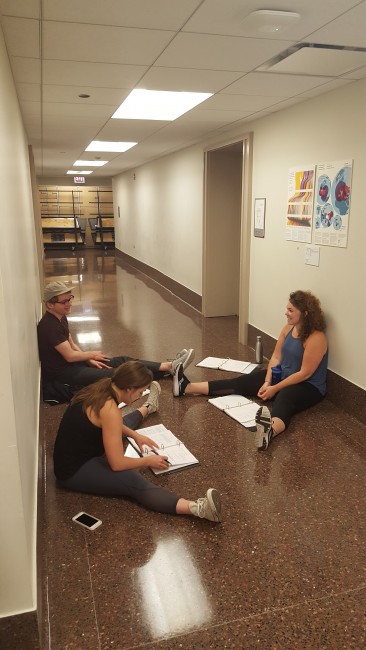 Many of my readers have asked me to write more about my experience preparing for the New York Musical Festival (NYMF), so here is the latest.

There were muffins, juice, coffee and fruit.  Oh yes…and there was the bacon dress (more on that later.)

Yesterday was the first rehearsal with a full cast.  Sharon Sachs had just arrived from Los Angeles and was prepared to dive into the role of the janitor/drama teacher.  She immediately went to work with the musical director, working on her solo as well as her other vocal parts in the show. 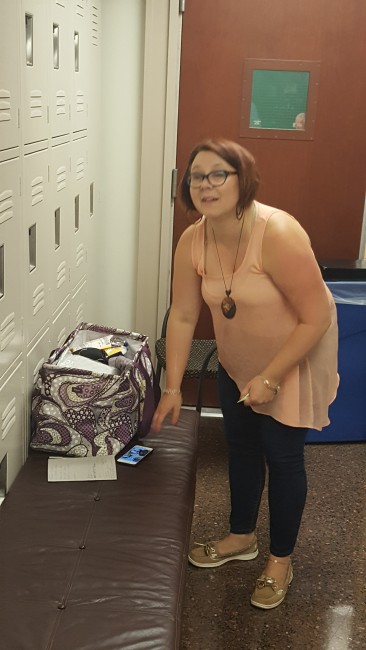 Meanwhile, the costume designer (the amazing Theresa Ham) arrived carrying bags and bags of costumes.  When I looked, I saw lots of clothes – I mean a LOT of costumes.  She told me she always buys more than she needs so that she does not have to go shopping again.  All of the costumes were purchased from Kmart and Amazon.  She laid out each character’s costumes, and one by one, each actor was fitted.   Each costume had something “special” about it to reflect the character’s personality. And then I was told that each actor would have two sets of “body parts”.  What?  In costuming – a body part is a piece of clothing that touches bare skin. And for every performance each actor will get a “fresh, laundered” costume body part – so two sets will need to be purchased.

In addition, the music assistant was making adjustments and changes to the score in the computer program Finale, while also coordinating with the orchestrator about changes for the instrumentalists.

Then, the props designer arrived, all of the rehearsal props were delivered, and a detailed discussion about the show props ensued.  What props are we carrying to New York and what props will he buy in New York? How will the props/costumes get to New York?  Who will carry them on the airplane?  Where will they be stored while we rehearse for two days?

And in the middle of all this, I left rehearsal to return to my office.  (Am I a coward?)  Before the day was out, I had two conversations with our NY PR firm about publicity, marketing and, especially, about the reviewers who are coming to the NYMF performances.  In addition, I had multiple emails from our general manager: Where are we storing our set pieces once they are delivered?  Who will pick up our rehearsal piano? And where do we get the program printed? 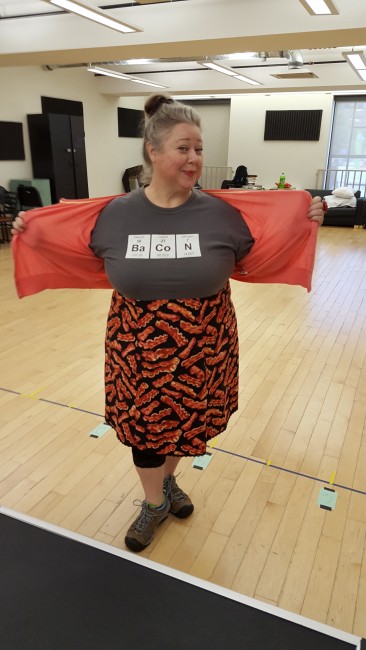 Ohhhh, the program….the draft had been completed.  So I took time to do a first review of our program as well as another promotional piece that we are creating just for companies that license musicals. Then the questions started coming:

Oh yeah about the bacon dress.  Sharon Sachs decided to wear a special dress to the rehearsal.  The bottom was a cacophony of bacon print and the top (spelled out in Periodic Table symbols) spelled

« The ever diminishing Broadway orchestra
Large or Small? »